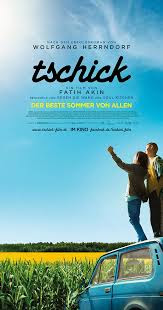 Something called Tschick turned up in this ragbag. It proved to be celebrity German director Fatih (Head On)  Akin's 2016 Goodbye Berlin which might have been expected to tour the festivals & art cinemas. But it wasn't even one of the titles the station promoted on its World Movies Channel - and it was a treat.

Fourteen year old Tristan Göbel is having a rough time - surly and unpopular in his class he’s first seen reading a disturbing personal account of his home life with mother Anja Schneider who is about to be sent off to Beauty School/rehab, with six pages to go before teacher Udo Samel sends him back to his seat.

At this point, short cropped Russian Jewish-Gypsy (“Jewish is a religion. Gypsy is having no place to live”) Anand Batbileg Chuluunbaatar joins the class and proves to smell bad and be even less popular than our hero. They are the only ones not invited by notes passed round the room to the pretty girl’s birthday party for which Göbel has been slaving away on a gift portrait of her.

When the newcomer admires the tiger windcheater Göbel mail ordered they start to bond. Their conversation runs to a montage of all the girls they fancy at school.

Göbel's dad, Uwe Bohm takes off with his “Assistant” Xenia Assenza leaving the kid alone at the empty pool home in the development that halted when rare bugs were found on the site. Chuluunbaatar, who impressively silenced a school yobbo by whispering something in his ear we don’t hear, has the formula for being cool about the birthday party, proposing they go there in his heisted, knocked-about blue Lada and give the girl the painting before casually leaving. The kids at the party flock to see him drifting the car on the road out front.

The body of the film comes when the pair take to the road vaguely headed for Chuluunbaatar's old home in Wallachia but actually providing an Easy Rider panorama of contemporary West Germany - the autobahn in the fog, sleeping in bags under the giant (suspiciously quiet) wind turbine, looking for a rural super market when the provisions they brought prove unsuitable (frozen pizza) before they get to join the open air local-grown family meal where the kids do a Lord of the Rings quiz to win dessert, out running a furious cycle cop, gorging on blackberries before they run into aggro girl hobo Mercedes Müller at the rubbish tip and needing her instruction on how to syphon gas.

We come to accept Chuluunbaatar's assessment that Müller is worth much more than the indulged school girls they knew, with Göbel cutting her hair with her Swiss army knife scissors and her topless, considering initiating him but instead hitting him up for the coach fare to her Polish sister in law. The scene of the trio carving initials in the rock and agreeing to go back to the spot fifty years later is nicely resonant.

The spray re-painted Lada gets into some Wages of Fear stuff on a log crossing on the lake and Göbel takes over driving. This takes us back onto the motorway footage we see in the opening and a giant lorry full of pigs.

Back home Bowe gets a lawyer to concoct an account where all the blame shifts to Chuluunbaatar but our hero refuses and gives the attentive judge the truth, taking responsibility - more family material and the nice shot with the mirror on the pool bottom. When the cops escort him on his first day at school, all the kids are impressed.

Good looking film with more substance than a lot of the material it resembles.  Curious use of extreme close ups - the half frame of Göbel’s face frame left, the blackberries. Nice animated closing titles. Overtones of  Scent of a Woman, Me & Orson Welles  to go with Easy Rider  and Michel Gondry's Microbe & Gasolene.