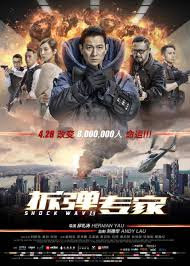 In  2017 Chak daan juen ga/Shock Wave was a substantial hit for the Chinese film industry. Better than Speed, pushing Hurt Locker and Soy Nero  - maybe not as good as the Spanish  Plana de Fuga, this planted the Chinese flag in the bomb disposal cycle. Lead Andy Lau (Mou gaandou/InfernalAffairs, 2002 and Tsui Hark’s Detective Dee) has been a star since the early eighties and director Herman Yau showed up a little later with a few serviceable efforts like Fei foo jing ying: Yan gaan yau ching/Best of the Best (1992) or Di shipanguan/Taxi Hunter (1993) which circulated in Australian Chinatown cinemas without drawing any special attention. His Ip Man series put him into another league.

Shock Wave kicks off with Wu (Tian zhu ding/Touch of Sin) Jiang’s nasties off on the robbery for which they’ve filled three Hong Kong cabs with explosives to blast cops in pursuit. Jiang’s younger sibling Wang Ziyi resents henchman Andy Lau (“The man my brother trusts”) without knowing he is an undercover cop who only reveals himself by trying stop the explosions, knocking the cellphone trigger out of the hand of the henchman in their car.

Escaping Wu takes a dim view of the cops running in his brother and Andy returns to the company of his fellow officers, training new recruits (and the audience) on bomb squad procedures.

Out partying, he encounters drunk divorcée Song Jia in her red dress, throwing up and creating a disturbance in the club. He has her put up in the cells, sparing her from public humiliation which would compromise her spot as an infant school teacher. They become an item.

Andy defuses a buried WW2 bomb (nice animation of the camera going inside the trigger mechanism) and is given an award for his heroism but, as he leaves, a car booby trap takes out Andy’s mentor Huang Rihua.

Wu has made a bundle in the Thai-Burma border drug market and is out to get Andy and retrieve his brother. With fifty multi-racial mercenaries, he sets a bomb in the Glouchester Road Court House square overlooked by high rises whose glass would shatter and shower down injuring those below. Andy’s co-worker Jiang Haowen sees there is still three minutes on the timer and grabs it for Andy to hold (C4 is very stable) while they dash to the bay and fling it into the water - after a selfie.

This is just a run up for Wu’s big operation where he jams the Eastern Cross Harbour tunnel with trucks at both ends, taking the travelers inside hostage, including Zhang Jicong’s tour bus and a car with three of Andy’s police colleagues. The heavy demands Andy handle the negotiations giving him a kick in the face and a cellphone. Wu wants his brother to be brought from prison. The brother however has got religion in the meantime and protests.

A couple of workers bolting from the service tunnel are shot down and the gathered press dive for cover as the police perimeter is pulled back, further ratcheting up the tension with the discovery that our heroine has been bundled into the boot of a cab holding a hand grenade without the pin. Andy  has to deal with that one.

Best scene however is the discovery of  young cop  Cai Hanyi/BabyJohn Choi whose Police ID accidentally drops out of the car (!) in an explosives vest, having to stand fixed rather than bolt and endanger bystanders.

Enough is enough and Andy goes into the final negotiation wearing his own explosives vest which un-nerves the mercenaries and leads to the big shoot out  - the first movie drone shots I recall seeing with impressive downwards views of the camera racing along the tunnel as passengers flee and cops advance blazing away at the bad hats from behind suspiciously effective bullet proof shields. The stretcher bound victim skids about among the cross fire.

Besides we’ve got the two explosives trucks counting down to the blast which would destroy the tunnel and befoul the bay for years. Does Andy cut the yellow wire or the red wire on his, talking on his mobile ‘phone to the fellow disposal man at the other site.

Made with apparently enormous resources and played with great, straight-faced conviction, this one doesn’t divert into back stories or motivations. It just gets on with the superior action set pieces. 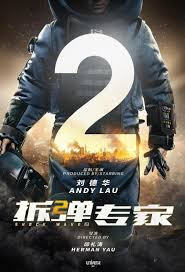 Its success guaranteed the arrival of the current Chai dan zhuan jia 2/Shock Wave 2 which proves a disappointment.

Overconfident, the makers have brought back Andy Lau as Poon Shing Fung their Bomb Squad hero from the earlier film in a plot cobbled together from seventies disaster movies along the lines of  Nippon Chinbotsu/The Submersion of Japan or Meteor, the Swarzeneger Total Recall and childhood antagonism flash backs from Oldeuboi/OldBoy, with a few quotes from“The Water Margin” thrown in.

We get a lively enough opening with terrorists ramming a subway train into Hong Kong Rail Central and a bank robbery where the low life repeats the first film’s business of taping the grenade with the pin removed into the hands of a girl hostage. Explosives expert Andy wraps his his bomb protection suit round her and takes the device to fling into sand bags where the impact still knocks him down.

Andy emerges like David Farrar in The Small Back Room with a prosthetic leg. (Yau himself has a damaged foot) Modeled on the handling of Gary Sinise in Forrest Gump, the effects work is remarkable here. The department refuses to put Andy back on active duty so when he’s getting his medal, he unfurls a protest banner and is recruited by the heavies (another suitable team of white guy thugs) as someone with a score to settle - but is he?

Victim of “Post Traumatic Amnesia” when he’s found disoriented after being injured in a string of Terrorist Bomb Outrages, Andy becomes a fugitive with everyone including himself unsure of his loyalties. Only his uniformed old flame Ni Ni can be relied upon and the bad hats have recruited Andy to participate in the spectacular destruction of Hong Kong International Airport complete with blowing up multiple terminals using trains packed with reliable C4. We’ve moved out of psychological drama into special effects spectacle with material that is loud but unconvincing.

Andy Lau, who also produced, has acquired gravitas over his now extensive career, as has co-star Ching Wan Lau (the Daniel Lee-Tsui Hark 1996 Hak hap/Black Mask or the Johnnie To 1999 Joi gin a long/Where A Good Man Goes). Individual moments get attention - subway trains piling into load bearing pillars, Andy improvising an explosion out of convenience store groceries, sky diving - but there’s no consistent structure to leave the viewer satisfied that what he’s seen reflects any reality or a well-crafted action movie universe.

This one proves a cash in quick follow-up, a considerable disappointment after its superior predecessor. Without a product starved environment it might have been expected to get less attention.