Lee Marvin: born February 19, 1924; died of a heart attack, August 29, 1987. Buried in Arlington National Cemetery across the Potomac River from Washington, D.C., next to Joe Louis.

It was 1980. Sam Fuller’s The Big Red One had just been released. Lee Marvin was in Australia and was dropping by to promote the film, taking time off from his marlin fishing adventure up north. Alan Finney, then PR boss at Village-Roadshow, generously arranged for me to have an extended sit-down “chat” with the visiting star for broadcast on 3RRR.

Frankly, I was in awe of the man. A WW2 veteran, who’d served in the United States 4th Marine Division during World War 2 and won a Purple Heart during the invasion of Saipan in the Pacific, he’d spent years doing bit parts before becoming one of Hollywood’s most memorable tough guys. A man’s man, I’d been told, someone who’d lock eyes with you and know immediately whether he’d rather talk to you or kill you. Better watch the eyes, I remember thinking, and be careful about the handshake.

If he offers me a drink, I certainly won’t be declining, or asking for a nice dry riesling. His poison of choice would be mine. Bring it on. I’d seen what he’d done to milksop James Stewart in John Ford’s The Man Who Shot Liberty Valance (1963) and it wasn’t going to happen to me. Admittedly that was only in the movies, but it was still him and the stories about his alcohol-fuelled ways were legend.

Asked about them in a Playboy interview years before, he’d made his feelings clear. “It depends on what I’m drinking, how much I’m drinking, why I’m drinking, and who I’m drinking with.” So, I thought, I’ll just thank him, take whatever it is straight, and try to remember the words to “The Battle Hymn of the Republic”.

When he strolled into the film-company board-room where the interview was to take place, he was smiling, a tall, white-haired man with a firm handshake and twinkling eyes. He clearly had no intention of killing anybody that day, there was only water on the table – even if there was a suspiciously clear liquid in the glass he was carrying when he arrived – and he was eager to accommodate. Asked by my producer, Helen Molnar, if he’d mind moving a bit closer to the microphone, he’d responded agreeably – and not unflirtatiously – in his rich, resonant boom of a voice: “I can do anything you want.”

TR: Would you regard yourself as someone who was born to act?

LM: No. No. It just worked out that way.

You started off very young, though…

Well I was 23. That’s not very young. I mean, it’s very young now, in memory, but I’d gotten out of the service when I was 21, and fooled around as a plumber’s assistant, cleaning septic tanks and diggin’ ditches in a rural town in upstate New York, the leading man pulled out – they were just out of the Neighbourhood Playhouse, a bunch of young actors – and at some party I guess I was dancing with my western boots on and they said, ‘Can he act?’ to some old-time actor. And he said, ‘Well, give him a try.’ And I read for them and they liked it. They needed a tall, loud-mouthed Texan for this role and I was giving a lot of mouth and I guess the boots sold ’em. So they hired me for $7-a-week, room and board and I loved it. And I took it from there.

The production was Roadside, wasn’t it?

That’s right. Way up in Woodstock, New York, in the Maverick Theatre. It was the summer theatre: “straw hat” they’d call it.

So how did you get to Broadway? Billy Budd I think it was.

Yeah. It was my first and last Broadway show.

I went to school for about a year and a half at the American Theatre wing, which was a spin-off from World War 2. You know, those shows like Winged Victory and stuff that they produced. And so they had a refresher course for veterans under Public Law 16, that kind of veterans’ administration stuff. So I went to that school with a lot of chaps who’d been in the marines and the navy. We had a kind of camaraderie. I don’t think we learned much, but we worked with some wonderful people.

And from there, next summer I went out and was doing one-weekers here and there and eventually the ELT, the Equity Library Theatre (in Chicago), which was the Guild’s own group, were trying on a new play calledUniform of Flesh, which was written by Chapman and Cox, two young professors at Yale, on a trilogy of three of Melville’s books called O’Hara, Master-at-Arms, The Frigate United States and Billy Budd, Foretopman. It was at the ELT Theatre, which wasn’t off-Broadway then, and a year later they took it to Broadway under the title Billy Budd and I got a bit part in that.

At that time did you see your future as being solely in theatre, or did you have ambitions to move into live television, as you eventually did? Or into film?

Well, I was doing live television at the time. Billy Budd I was never happy with, ’cause I thought that all the directors had missed the point of the play. They were very aesthetic about it, but it was 1798 in the British navy which ain’t no cup o’ tea. These were rough men and they were all portrayed a little lightly for my liking, and I said, ‘Well, I’ll never do anything like this again.’ And I kinda lost my point because I was so disturbed by the play and it was a tremendous thing, but the box-office wasn’t there.

And then one night I was just standing on the stage and looking out across the audience and all I could see were the green Exit signs. And I said, ‘I’m leavin’.’ And when the play closed after 110 performances, I was doing a TV show and one of the stars then had a car that he wanted driven out to California. So I said, ‘OK. Gimme your credit card and I’ll do it.’ So I drove to California and three days later I had a job.

You’re in the Navy Now. 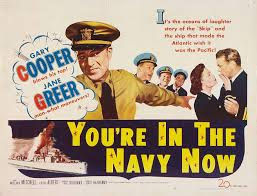 Right, that’s the first film, but I believe before that…

The first film that I had a speaking part in. I had done some extras work in New York with Preminger and people like that.

Oh, things like Tattooed Stranger, Where the Sidewalk Ends… around ’48.

Well, where does the live television come in, because I believe you did a lot of work…?

I did about 250 live TV shows in New York in that three-year period.

That must have been extraordinary. I’m still amazed by the concept of live drama on TV…

What was the rehearsal time?

On a half-hour thing like Escape, or any of those shows, you’d rehearse three days, one day on the floor with camera and then do it that night. It all took four or five days.

And then you would just simply shoot?

There must have been some awful mistakes made at the time?

Tremendous, but that that was the charm of it. People would watch it – not that they had anything else to watch on the box at the time, except wrestling or boxing or something – but they used to like to see the actors go on their faces or have the set fall on them. I mean, it was a thrill to watch live TV, heh-heh.

Were there any recordings made of that work, or is it gone forever?

No. They used to make kinescopes, whatever that is. I think it was a 16mm print and they had some kind of device that they would put in the control room and then record it. I guess for libel, or something like that.

There are people like Sidney Lumet who used to work…

… and there were a lot of film directors who actually got their grounding in that work.

John Frankenheimer… they were all there. Oh gosh, yeah. A lot of the actors too.

And then we’ve got You’re in the Navy Now, the Henry Hathaway film: your first speaking part. Do you remember it?

Sure, very well. You wanna hear all my lines. Well there was ‘yessir’ and ‘nossir’, an awful lot of those. That was about the content of my part.

I’d be talking to myself on the ship, you know. I was playing the guy on the phone and answering the phone and the guys in the background… I’d play all four parts of the phone conversation.

What you have are the release dates. Figure on nine months to release…

Well, after that come films like the Don Siegel one with Audie Murphy…

Yeah. Doool at Silvah Creeeek (guffawing)! I played Sheep Dip in that. So I know I’m gonna get mine, right? If Audie Murphy’s the Silver Kid and I’m Sheep Dip, you know that, when the game of poker is over, who’s gonna get it.

And that’s the start of your career as a heavy?

Were you happy with that as it was happening, or did you feel constricted by it?

But did you have any ambitions to take the Audie Murphy role at that stage, or were you happy playing the parts which were sort of comic heavies, in a way? One can sense that you’re laughing at the same time as you’re doing them.

Yeah, you’d put a twist to them. No, I was very content. I really was. I figured if I could ever get to $12,000 a year, I’d have it. So my sights were not set higher than I thought my talent was.