The Current Cinema - Barrie Pattison unearths a magnificent new Japanese animé IN THIS CORNER OF THE WORLD (Sunao Katabuchi, 2017)

I wish I’d got to Sunao Katabuchi’s Kono sekai no katasumi ni/In This Corner of the World in time to head a few people its way before the end of its one week run at the George St. Event Cinema. 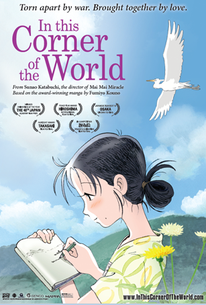 It is on the way to being the best movie now circulating, something I’d never have guessed from promotion consisting of a poster (left) of the J-Teen protagonist looking like a character in the Peanuts strip. If that was intended to lure any dutiful parent wanting to treat their offspring to a manga outing, I can’t see it working. Single figure attendance at the session I attended.  This may be just as well because this one is no way a kiddie pic. though it would be interesting to know what any lost tinies who did wander in made of it.

Katabuchi worked with Studio Ghibli on Maja No Takkyubi/Kiki's Delivery Service among others. That influence shows more in his 2009 Maimai Shinko to sennen no mahô/Mai Mai Miracle.  The water coloured palette and lack of detail here is closer to Isao Takahata’s 1991 Omohide poro poro/Only Yesterday than full grown Miyazaki. We can spot the studio connection in insects like the sugar stealing ants, cicadas or dragon flies, floating thistle down echoing swirling imaginary blossoms, running clear water, trains and buses. However, what we get here is different.

It took its makers six years to complete this and it only came into being when it was financed by a several times over-subscribed crowd funding drive. The English voiced version did get recognition as a prestige offering in the U.S.

I needed a while to fall in to step with what Katabuchi was trying to do - nostalgic account of a nineteen thirties-forties childhood, critique of arranged marriage, new direction in animation, the changing face of Japan, preachment against The Bomb?

In This Corner of the World is derived from a manga by one Fumiyo Kono which has already been filmed as live action. The reason for cartooning is not immediately obvious but the hint that we are dealing with something substantial comes early when the school girl heroine, with a talent for drawing with her stub pencil, takes the idea of the classmate artist she’s attracted to and turns his description of the waves as bunnies jumping in the water into a coloured sketch. Characters drawn in the film’s conventions are inserted in what we recognise as her personal styled background. That would be a big ask in live action.

We start with cutesy Hiroshima (Oh, Oh!) family material with the kids getting mud covered and hosed down or joining in preparing family meals. The family seaweed gathering business having fallen victim to land reclamation, dad works in the ship yard and the Japanese fleet with its giant battleship Yamada becomes a source of fascination and pride. 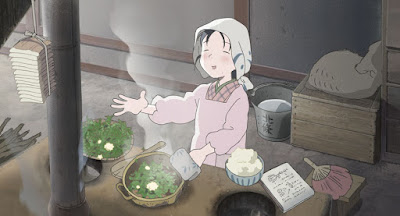 We expect the film to be about young Suzu, our heroine’s maturing as an artist and romance with the boy who shares her interest. But to her surprise, from Kure town, southwest over the mountains, comes an offer of marriage to a boy whom she had forgotten meeting on the local bridge. Off she goes taking on the care of his ill mother and getting a hard time from her sister in law about wearing the kimono she has to painstakingly converted to a trouser suit. Her little niece buddies with her - a particularly winning character.

Suzu’s school admirer shows up in uniform with a vague plan to rescue her and there is the remarkable scene of her husband sending her off to the shed where they’ve set him up with a futon. Under the blanket the old flame and Suzu discuss her life there. Knowing and naive, it takes us further into the tone that make this story exceptional.

The date captions on the film are racing now we’ve gotten to the war years and their sinister implications.

Food and clothing become key elements - finding the pre-war cloche hat outfit boxed in the closet and the detailed section of using feudal samurai. Katabuchi’s  “Increase Food
Method” pads out the meagre war time food rations with re-heated rice and field herbs. It’s the loss of the family sugar store in a failed attempt to foil the ants that sends Suzu
into the town for the first time encountering the black market’s eye popping luxuries changing hands at incredible prices – especially water melons they are forbidden to grow.

Getting lost on the way back she finds herself in the day time deserted brothel quarter where such a nice vice girl directs her and tells her never to come back.

Curiously the film’s most conventional scene has a couple of cartoon comic MPs dragging Suzu home for daring to sketch the shore line with the ships at anchor. The family finds them ridiculous.

The war intrudes with father in law hit by air raid shrapnel while protecting Suzu and a visit to him in the hospital means that they hear the 78 of The Woolly Bears’ Orchestra version of Moonlight Serenade. “Is this the enemy’s music?”

Bombings are driving the family into their own shelter and a crowded public one with it’s straw-bail packed entrance, setting up the film’s most affecting sequence, involving the niece and an injury which turns round Suzu’s life. This one is covered in simulated scratched on black animation, another point at which visuals disorient the viewer effectively.

By now the thought of these characters perishing is alarming and when the Atomic blast finally comes (vibration shakes loose a roof tile, a cloud like those Suzu used to sketch) with its ragged dying stranger leaving a dark stain and polite motherless child, the impact is overpowering.

The Americans show up not as menacing conquerors but as a source of new dietary items. The child’s point of view with which all this is shown is one of the film’s unique and most imposing elements. It is something removed even from similar material in the Masahiro Shinoda 1984 Setouchi shonen yakyu dan/MacArthur's Children. The most obvious comparison is with Takahata’s revered 1988 Hotaru no haka/Grave for Fireflies.  I rate In this Corner of the World the best of these remarkable films.

A situation where something of this standing vanishes while we are offered runs of Wonder Woman movies or The Killing of a Sacred Deer is revealing of the local scene.  Too revealing.
Posted by Film Alert 101 at 20:57