Too Late for Tears (1949) was the second Noir directed by Byron Haskin with the iconic blonde Noir Femme Fatale d'Occasion, Lizabeth Scott, and effectively her last true noir. Scott would go on to do several more movies, some of them distinguished including Dwan's Silver Lode (1954), Wyler's The Detective (1950) and a weakly written Brit Noir from Terence FIsher Stolen Face (1952) which was one of the first in a series of quota quickie Brit ripoffs from the genre with at least one "over the hill" (older) American star in the lead to secure US distribution.
But Too Late is a fitting climax for LIzabeth's career. Playing one of the most ruthless Femmes fatales of the forties, in a role that springs from a domestic past of life in the "Middle class Poor", Scott's character seizes the extraordinary opportunity from literally falling into a large wad of cash, to realize her dreams of wealth, while disposing of man after man on the way to a life of Riley.
Scott was never a "big" actor with a wide range, but she did a great deal with what range she had, and her vocal delivery teamed with a poignant smile to frown face and peekaboo hairstyle delivered her a legion of loyal fans which perseveres to this day. I am one of them, and I would have to say her lesbianism, which was ruthlessly exploited by the early 50s smut rag Confidential possibly did her as many inadvertent favors as it did other similarly slandered actors like George Nader, Rock Hudson, Rory Calhoun and so many more with a kind of notoriety that actually enhanced their status, especially to fans of Noir.
The movie itself while not one of the strongest in the noir canon, comes late in the cycle, and in a year in which it had to compete with masterpieces like Criss Cross, The Reckless Moment, Caught, He Walked by Night and others. What makes it stand out is LIzabeth Scott herself, in her last major Noir performance, and the way in which an occasionally ropey screenplay is morphed into full scale tragedy from the all too rare but extremely interesting "domestic noir" of suburban family conflicts, and the relatively flatly lit, shallow depth photography of movies like this and Pitfall (Andre De Toth, 1948).
Scott's initial "redemption" by the discovery of the bag full of cash is hard for an audience not to share. In fact, the snare is so strong by the time Don DeFore's character turns up as the brother of her first husband, the sketchy and frankly underwritten part is barely enough to bring us on side. Yet. This is also the movie in which the sublime Dan Duryea, perhaps the most complex and enjoyable villain in all of Noir is brought spectacularly undone by the female lead.
The resurrection of this title from a total Public Domain hell black hole is almost as interesting a story as the scenario itself. Up to 2016 all copies of the picture circulated in atrociously weak rips from 16mm and even rarer TV screenings. Indeed, most prints had either no opening credits or bodgied up ones, with virtually no shadow detail or clean audio track. Eddie Muller's Noir Foundation located two original dupe nitrate positive prints in France (where the movie is titled "la Tigresse") and a fine grain acetate 35 print of the 1955 reissue, titled Killer Bait.

From these elements the Noir Foundation and UCLA performed a 2K restoration of the title right down to recreating the credits and rotoscoping them in original typeface over the reissue print's otherwise intact opening night-time car sequence. The result is a remarkable revival, displaying a picture that is almost entirely bathed in dark and shadow with very few short sequences shot in daylight. The viewing experience of the new 2K on Kino Lorber Blu-ray from early 2017 is revelatory and commanding. 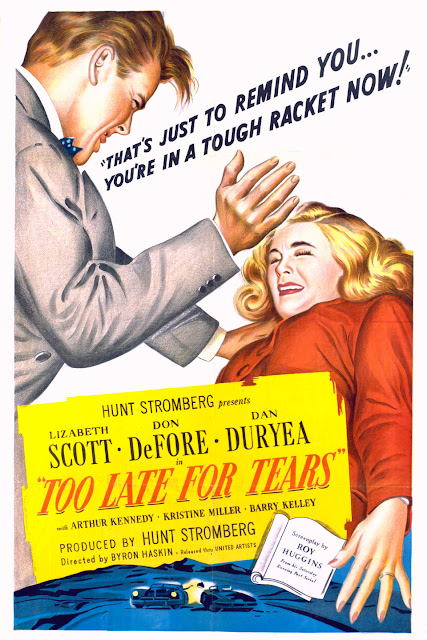