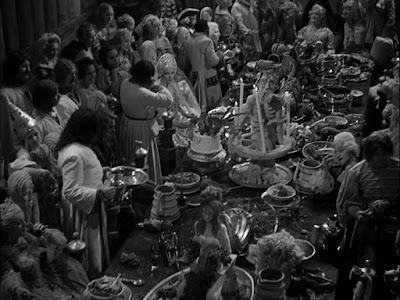 Editor's Note: The screen at left is from Josef von Sternberg’s extraordinary The Scarlet Empress (Paramount, USA, 1934) one of the seven collaborations between JvS and his star Marlene Dietrich, perhaps the most rewarding streak of movies ever concocted by a director and his amazing Galatea.

David Hare published the screen on his Facebook page  and it has been followed by some most excited chatter about his film and more.

Here is a lightly edited transcript of the FB conversation:

David Hare: The score, as I recall, at this point in the movie is a Hungarian Rhapsody which Jo turns into a Zigeunerweisen. The whole movie has a through composed score which is totally unbelievable and unmatched in all of cinema and somebody (maybe me) will have to one day decipher it for the insane masterpiece it also is.

Adrian Martin: Sternberg himself apparently had a lot to do with that score!

David Hare: As he also did with Devil is a Woman (Paramount,USA, 1935), Jo re-scored and adapted several popular classical pieces for the score to Empress including the Marche Slave, the 1812 Overture for the climax (including the horns from Wagner's Valkure) and a glorious traditional Russsian Orthodox mass setting for the wedding sequence. The whole movie is through composed, like a "musical" indeed. It is one of the great emotionally direct scores in movies, and with his reversion to title cards to "Shape" the story he not only nods back to silent cinema but deconstructs the three or four act scheme for traditional movie narrative into a ten sequence lineal narrative form.

The deconstruction and reconstruction allows for multiple climaxes, one after another, always embedded within a spectacle, like the two staggering dinner table feast sequences shot with a travelling crane from above.


In the first, shown in the screen above, Dietrich is almost swallowed up by the crowd, not least part of which are the stone decor figures by Peter Ballbusch all around her, who are like a second mute "cast" for the movie, and in the second feast sequence Dietrich now totally in control of the occasion with the extravagant unloading of her jewellery to "donate" them to the priest, thus tying the knot between the Church, the military (with whom she has already slept), and the state to enable the final takeover. 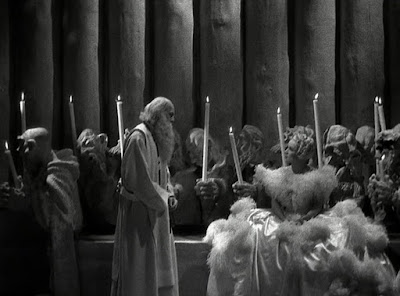 The movie is formally unique in cinema, along with everything else about it, in both it and Devil is a Woman Dietrich not only appears to be dictating her own mise-en-scène with a kind of total immersion with the camera, she is in fact controlling it.

In Devil the same elements occur, another through composed score lifted from Albeniz, Rimsky-Korsakov, Mendelssohn, Granados, et al, re-scored and adapted and conducted by Jo. He also photographed the film himself without any other work from any other DP, and among other things visually, Travis Banton's wardrobe is coded to modulate from black and white, to white, to black.

For this movie the form and structure are based upon an introduction and then a verbal recollection with a hard edit (rather than a lap dissolve, the edit itself blurring the distinction between "reality" and "memory") by Pasqualito on the single word, "but" when the two men first meet. The next hour of the movie is shown in that (true and invented) recollection, and then for the masked party and Antonio's escape, it returns to the present.

The last line of dialogue is one of the most sublime and self-referential in cinema. ""Have you a cigarette?.. that's funny, I used to work in a cigarette factory." At that point the carriage picks up Conchita to return her to her S&M dance with Pasqualito, and Jo rescores the repeated underlying Granados piece for the end into a stunning minor chord progression to accompany the long shot into the valley with the sides of the image blurring into memory and eternity. I feel as though I've lived with these films as a part of me since I first saw them at 16, (52 years ago.)

Here's a more or less complete list of musical items and arrangements for Empress, thanks to IMDb, believe it or not!

Symphony No.4 in F Minor, Op.36
Written by Pyotr Ilyich Tchaikovsky
Excerpts played during the opening credits and incorporated into the score often

Marche Slave
Written by Pyotr Ilyich Tchaikovsky
Excerpts incorporated into the score often, but predominately when Catherine
is about to capture the throne at the end

Kamennoi-Ostrow, No. 17
(uncredited)
By Anton Rubinstein
[Adapted by von Sternberg for wedding sequence]

David Hare: (Regarding The Scarlet Empress) Criterion were given a totally dreadful very badly tele-cined transfer from Universal. The DVD is worthless. Since then a myth has persisted that all the prints of Empress had been botched from a supposedly new negative to positive process performed in the 90s. This has never been either proved or disputed. Those of us who used to visit Paris throughout the 80s and 90s knew better of course as they were forever showing the cycle in really very nice 35mm prints there. Even Morocco looked great. As did the French DVD run of Jo/Dietrichs during the early 2000s which surpassed the American ones.

The source used for the French Blonde Venus was later used for a French Elephant label Blu-ray this year which I reviewed. According to Geoff Gardner it got a record number of hits for disc reviews here on his Film Alert 101 blog which tells you something about the popularity of these films and the desire for superior upgrades of all of them.

Then a 720p TV Broadcast of Empress came up in France via the backchannels, and now this 1080 from the same source (exact same tramline scratches at the same points but with greater rez of course). It also has the frame cropping on bottom and left side vertical which was part of the original 1080 encode. Further fish may be smelt frying around these parts next year.

More Editor's notes:David's post on Blonde Venus which is linked above remains the most popular Blu-ray review post ever on the blog. Thanks as well to David, the greatest Sternberg aficionado, for pointing out a little number/compilation "If It Isn't Pain"  deleted from The Devil Is a Woman which you can find  here on YouTube .