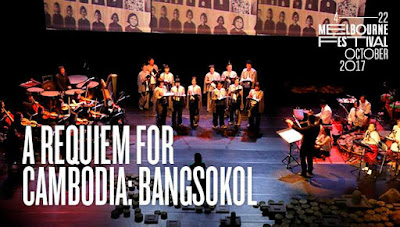 White material was draped over each seat when we entered the auditorium, with a request to wear it as a shawl during the performance of this Requiem for Cambodia, the white bangsokol shroud.

As the lights dimmed a hundred or so people walked down the main aisle, onto the stage, and individually placed an offering. Many moved off the stage after their offering was in place, but a choir, and two ensembles remained, an Asian group of musicians, and a Western chamber string orchestra. They were the performers in this Requiem, by composer Him Sophy, a moving blend of the two worlds of music.

At the back of the stage, was a large screen, capable of holding three Academy ratio panels. On these screens there played out an impressionistic recent history of Cambodia, the serenity of the temple dancers before Nixon declared "Cambodia is the perfect place to weaken the Communists" - setting in train the instability that led to bombing, burning villages, the horrors of the Pol Pot regime, the killing fields, and many deaths before somewhat of a return to normality.

This complex film is the work of Rithy Panh (THE MISSING PICTURE, Cambodia/France, 2013.) Mostly, we see one image repeated over the three panels, but it also moves into more complex variations - one moment on each screen, but with each screen some ten or fifteen seconds out of synchronism, one single image over the whole breadth, all blending and moving forward inexorably and movingly.

This was a very rewarding and moving event. 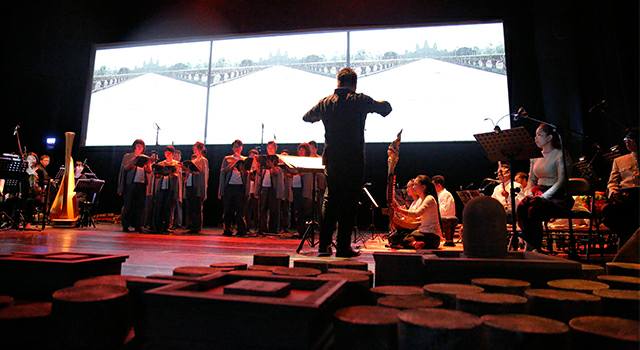