Editor’s Note: Barrie Pattison's earlier reports on the Italian Film Festival can be found if you click on the following film titles After the War, I Can Quit Whenever I Want to: Masterclass, Let Yourself Go, Messy Christmas, Stories of Love that cannot Belong to this World, These Days & Sicilian Ghost Story, From Naples with Love & Ignorance is Bliss, Fortunata & The Intruder and Wife and Husband

After his Porte Aperte (1989) and Lamerica (1994), two of the most impressive European films of the last decades, I figured that a new Gianni Amelio was going to be the highlight of the current Italian Film Event and I wasn’t wrong (so far). 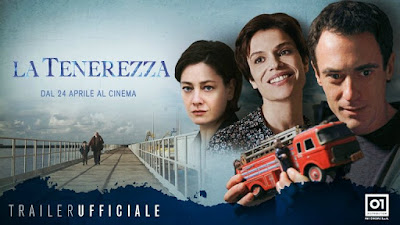 La Tenerezza/ Tenderness is not a big statement like those. It’s a careful account of the life of retired Neapolitan lawyer Amelio regular Renato Carpentieri, first found pulling out his drips and leaving hospital. His daughter Giovanna Mezzogiorno asks whether he was honest and a clerk tells her “It’s hard to be a good lawyer and honest too.”

We kick off with Mezzogiorno making an unappealing entrance ratting out the Arab in the glassed in court room dock she’s translating for. Even her own child doesn’t much like her. However, after we’ve spent two hours with her father we understand her a whole lot better - another of the film’s many surprises and a considerable achievement.

I don’t want to describe the piece in detail because it doesn’t really take shape till it’s half over and its impact depends on its unpredictability. Greta Scacchi’s character provides one total shock. A couple more super stars of the current Italian cinema, Micaela Ramazzotti and  Elio Germano figure and the ‘scope camerawork is Luca Bigazzi again, here in top form. Editor Simona Paggi has become a front runner too.

It’s rare to find a film with such a complex argument that holds attention for two hours and avoids all the pitfalls of sentiment and cynicism. I would class this one as must see.

I like to think I’ve kept an eye on Italian films down the years - art house, ethnic cinemas, VHS, SBS, Italian film weeks and even a few excursions into their home ground. Some of their IMDb entries have only my comments. However, when I start checking out the credits of Tenderness and its accomplished personnel I become aware of how fragmentary my access to their work has been. That’s something I regret.

Editor's Note: Tenderness has two more screenings in Sydney, Tuesday 3 October at 1.45 pm at the Verona and on Sunday 8 October at 1.30 pm (check the IFF website for the theatre for the latter).