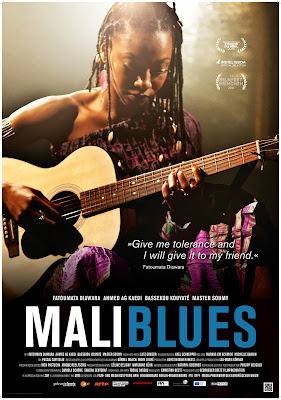 Some believe Mali, and particularly Timbuktu, to be the birthplace of the blues. Mali Blues (2016) is the third significant account of the civil war in Northern Mali to appear in recent years.

A conflict that started in 2012 as a liberation movement of the Tuareg peoples, it was quickly taken over by jihadists including a splinter al-Qaeda group who imposed strict Sharia law, particularly in the northern cities of Timbuktu, Kidal and Gao. Driven out of the cities a year later by forces led by the French military, the jihadists still roam across Northern Mali attacking troops and attempting to impose their version of Sharia law on locals.

Abderrahmane Sissako’s Cannes winner Timbuktu (2015), told the story of a cattle herder, his wife and their children as they became subjected to the absurd court judgements handed down by the jihadists who had overrun that fabled city.

Charlie English’s The Book Smugglers of Timbuktu, published in 2016, is a page-turning account of the archivists and librarians who fought to save tens of thousands of medieval manuscripts (many of them in private hands) from the al-Qaeda fanatics out to burn them.

Mali Blues follows four performers – the Tuareg guitarist Ahmed Ag Kaedi, forced to leave his home town of Kidal in the north when the jihadists burnt his equipment and threatened to cut his fingers off; singer-songwriter-guitarist Fatoumata Diawara who also acted in Sissako’s Timbuktu; a streetwise rap singer Master Soumy; and the “praise” singer Bassékou Kouyaté who, among other things, shows off a ngoni, an instrument he claims evolved into the banjo. 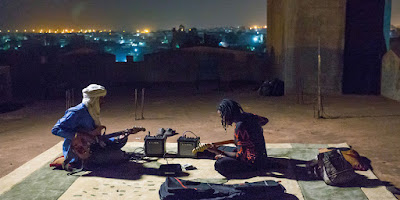 And Master Soumy, who delivers an arresting rap about the plight of his religion:
Some spend their day happy and having fun and laughing
But in Gao people live in fear
What did they do to God?
Some are joyful and dance
But in Timbuktu peoples guts are tied in knots
….
You who torture people
Explain your Islam!
….
They make ruins of homes
Courtyards into holed calabashes
They say they fight for God
But their pact is with Satan
I’m shocked and disgusted
My body hurts up north
Kalashnikovs and bombs
Explain your Islam!
Torture, rape, thrashings
Explain your Islam!
Abuse and killings