Editor’s Note: Barrie Pattison's earlier reports on the Italian Film Festival can be found if you click on the following film titles After the War, I Can Quit Whenever I Want to: Masterclass, Let Yourself Go, Messy Christmas, Stories of Love that cannot Belong to this World, These Days & Sicilian Ghost Story, From Naples with Love & Ignorance is Bliss, Fortunata & The Intruder, Wife and Husband, Tenderness and It's the Law


Daniele Vicari’s 2012 Diaz-Don’t Clean Up This Blood! (title in English) is so imposing that I homed in on his new Sole, cuore, amore/Sun, Heart, Love with some enthusiasm. While it has strong characterisations, convincing locations in the Ostia region and the significant subject of the working poor, I came away disappointed. 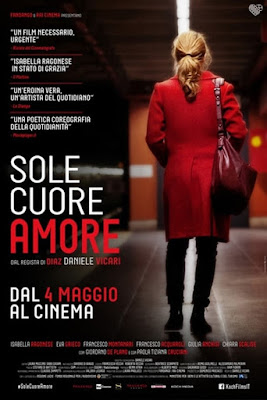 The film is unrelievedly grim and it is undermined by the rather precious device of cross cutting Isabella Ragonese’s hard lot with the dance performances of her downstairs neighbour Eva Grieco, their brass instrument accompaniment blaring on the track of both.
Ragonese is a mother of four who finds herself working as a waitress two hours away from her home, getting up at four thirty in the morning, catching an unreliable bus and train and being docked by boss Marzio Romano Falcione for late arrivals. One of the film’s strengths is that both she and the film see his point of view, having hired her on the basis that she would work his seven day week and having to placate his dissatisfied ex cashier wife and expect the same standard of competence from his Arab student beginner counter hand. There is a nice exchange with Ragonese who is surprised that the girl enjoys male pin ups and is told “There are a billion Arabs don’t expect them all to be idiots.”

Unemployed husband Francesco Montanari is doing his best. He looks after the kids and provides a spliff to smoke on the balcony of their sea on both sides flat but Ragonese is too exhausted to get involved in sex with him.
The pressure on her mounts plausibly but not all that involvingly, piling grief upon grief. Throw in a lesbian shower scene and a little girl singing "Sole, cuore, amore" in the cafe.

Vicari handles it all with skill - strong performances and a convincing, detailed urban setting. The book is still open on him.