Vale Peter Corrigan - A brief appreciation of a serious life

I haven’t seen Peter Corrigan for quite a few years but news of his death still comes as a shock. Who would think him as other than of the immortal. Not much point in rewriting a way through the long life of achievement either. You can find that on a quite good Wikipedia page here. I will put in my own two cents worth and say how much I love that RMIT Building in Swanston Street. Beautiful in my view though I know many think otherwise.

But he was a larrikin, a challenger of authority and someone who constantly provoked others into their best. I visited his workplace a couple of times decades ago, the first time because I had an invite to look over his library. He kept it under lock and key and it was unique…. But the atmosphere of the place, lots of dedicated young people burrowing away was special in the extreme. 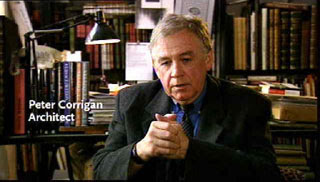 He acted the grumpy bugger with consummate skill. He used to enjoy it I’m sure.

His production designs go all the way back to student days in the old Union and Architecture Theatres at Melbourne Uni. Always striking even when done on near to non-existent budgets. As the shows got bigger he managed the transition. Directors like Barrie Kosky turned to him all the time. There will be lists of what he worked on all over the place I’m sure.

But one little period does warrant some additional memoir. Back in 1982 and on into 1983 Peter had a real bee in his bonnet about national arts institutions being located in Sydney. All this Federal money was tipped into slush funds that were pumped out most particularly in the direction of NIDA. He wanted it stopped. With his mate Dinny O’Hearn he wrote letters and organised meetings designed to really irritate the Federal Minister. Around this time, Bob Hawke got elected and I went to work as a staffer. Corrigan found ways to come up to Canberra and use the resources of a Minister’s office to send out what he called samizdats to every member of Parliament. No doubt the recipients all forwarded them to Barry Cohen the Minister for the Arts and some poor bugger had the job of writing a couple of hundred replies.

He dropped into Parliament House and came into John Dawkins office with so much regularity he was a part of the family for awhile. Dawkins took a liking to him even to the extent of taking him over to Fremantle to show him a parcel of land on the shore that Brian Burke wanted to give to some developer mate to build houses on and no doubt make a fortune. There was a thought that Corrigan might do the drawings for something special that would shame Burke into treating the precious spot with some respect. But this was Western Australia in the Burke era. Thuggery prevailed.

Corrigan’s arts location campaign eventually petered out but I think he made the point. The Labor Government didn’t hurl money at its mates in NSW and that was something. The location of and support for places like the ANG, the NFSA and the Museum all probably owe just a small something to the mindset that Corrigan pursued.