The Current Cinema - Nine things I ponder about LA LA LAND.... before, definitely, I have a further closer look when the Blu-ray comes out

1.      The opening sequence set in the traffic is pure Jacques Demy, think mostly Young Girls of Rochefort. Out of nowhere a group of incredibly handsome men and gorgeous women, all wearing single primary colours emerge from stalled cars to do some fancy dancing on a freeway. Fabulous. Breathtaking. Wow! 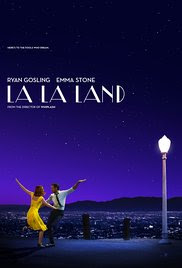 2.       The clearest homage to Demy is in the use of irises to open and close some of the sequences.  It’s a nostalgic throwback via Demy to silent cinema as well.
3.       The beautifully lit shot of the moment when Mia arrives back at her car only to find it towed away seems a clear homage to another favourite, Edward Hopper. The slash of light, the single lonely figure. A painting (or was it a poster?) of Hopper’s is briefly glimpsed in another scene.
4.       Ryan Gosling and Emma Stone can dance just a little. Neither can sing to save themselves. In the moment when they ascend to the stars and then dance in silhouette across the sky, suddenly their dancing gets better, more elegant and precise. This may be explained by the end credit to two stand in dancers.
5.       There are several moments when to emphasise rapture between the two principals, the camera dollies in and the background disappears to black. It’s always a stunning effect if it’s pulled off. I’m sure it’s been used or attempted a thousand times but the best use of the effect I ever recall was in Joseph Losey’s The Criminal  in the single shot where the psychotic prisoner Pauly explains why he has to be kept locked up.
6.       The ending, which hopefully I’m not spoiling, attempts, in a very grandiose way, the same effect as in The Umbrellas of Cherbourg. Sometimes you have to accept what seems like second best offers for happiness.
7.       Chazelle doesn’t go the whole hog where it comes to filming the dancing sequences. Without having the aid of Dr Bordwell’s shot clocker, I cant do a comparison between these sequences and say the dancing sequences in any of the Astaire Rogers movies.   However, even without the stats to hand it’s obvious there are far more shots per sequence  Judicious cutting limits what we might call the Baz Luhrman method of shooting musical numbers. This involves random cutting, eliminating the dancers’ feet, being unaware of the beauty of chorus lines and employing choreography of total banality of movement. La La Land  does a lot better in all these departments.
8.       I found myself emotionally undetached. With Demy and with Donen and Kelly and Minnelli I frequently very quickly find myself either sobbing or close to it. Maybe this has a little to do with the fact that the central song in the new movie is just so so. Not a heart string puller anywhere. Maybe it will improve with age or repeated viewings but I cant see it on a list above Funny Face, American in Paris, Umbrellas, The Pirate, The Bandwagon, even that wreck of a movie West Side Story....and more. Even a single memorable song transforms both the ordinary and the brilliant onto a higher plane.

9.
If there was a single thing that might have made La La Land really special it would have been the inclusion of what I think used to be called a specialty number.  Something like Donald O'Connor's solo dance in Singing in the Rain  or Ray Bolger’s out of nowhere tap dance solo number at the ball in The Harvey Girls perhaps might fill the bill. Maybe the great number when the band is on the road is supposed to make do but within that there's a significant plot advance so it's not just a matter of watching some brilliance for its own sake. OK that’s a casting and script problem but when you make a movie like this you create just a little bit of dreaming. How can I help! That’s very rare. 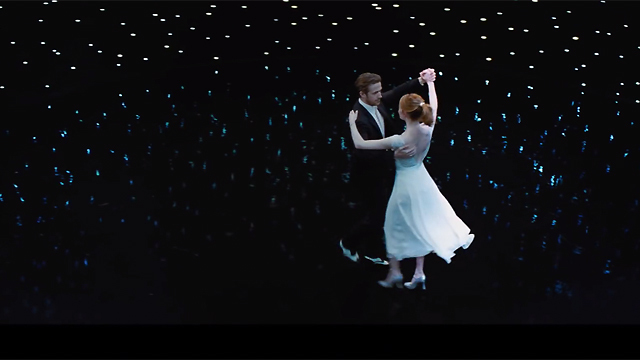