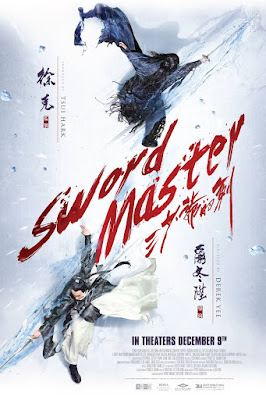 In the nineteen seventies Hong Kong’s Shaw Brothers Studios dominated the Chinese speaking market. They had obliterated the colony’s small screen, black and white productions and the mainland’s Marxists had thrown in the towel for the Cultural Revolution.

The kung fu film was conquering world markets and a sub- section of that, the wu xia pian or swordsman film was best exemplified by the work of King Hu, its most prestigious film-maker.

This cycle came to be dominated by the films simplified by Chu Yuen, the one important survivor of the pre-Shaw era, from the convoluted newspaper serials of writer Ku Lung.
Master swordsmen battled killer clans in studio fields sewn with paper flowers and dominated by the red lamp sun hung above them. In the company of his Xin hua da dao/Pursuit of Vengeance (1978) or Chu liu xiang zhi you ling shan zhuang/ Perils of the Sentimental Swordsman (1982), Chu Yuen’s San shao ye de jian/Death Duel (1977) was a relatively minor entry, with its highlights being guest shots by Shaw stars David Chiang, as a master who they have to keep in a cage, driven to madness by his kung fu studies, and Lo Lieh as one anguished to the point of smearing his face with blood after a killing. It did however launch the stellar career of Chiang’s brother, Derek Tung-Shing Yee who joined the ranks of costumed heroes in these films.

Forty (!) years later Yee is an established director (Shinjinku Incident) and great survivor Tsui Hark has produced his re-make of  San shao ye de jian as Swordmaster in 3D and it turns out to be an event movie.

Very little of the seventies plot survives - injured master shelters with the village family of a brothel girl and opponents face off for the death duel to establish supremacy in the Divine and the Demonic world.

The old buzz of recognising the preposterous Ku Lung plot complications & imagery is back, this time transforming his universe into one of the most extraordinary things contemporary cinema has to offer. The Palaces, brothels and villages we remember from the Shaw films are now visualised with more complexity and scale and the film doubles back with flashbacks to account for all those inexplicable plot developments we used to take for granted. It’s realised with an extra four decades of digital effects technology. Elaborate studio decors played against a coloured sky are divided into planes by 3D camera work. The jug is split with a slo-mo sword stroke that shows us the liquid suspended in its two halves. We are regularly showered with digital spears and arrows.

The film is a succession of extraordinary moments. The ice shattering under the impact of the fallen warrior, the disgruntled lieutenant, who has talked white robed PrincessYiyan Jiang out of slaughtering the handmaidens to accompany the perceived faithless deceased Kenny Lin Gengxin into the nether world, impales the eager one he has been offered as a swap for his royal love object. Snake tattooed Peter Ho splits the timber memorial to his
fallen adversary, the Third Master of  Supreme Sword Manor, with a single stroke. (“Losing a rival is like losing your soul mate”). He goes off to sleep in his coffin in the flower covered mountain cemetery. The whore house handyman psyches out the hoons, who refuse to pay, by standing there while they stab him four times. There’s the great scene of Ho arriving in the background hauling his grave stone as Kenny takes down the nasties menacing the village. The Master of Supreme Sword Manor (Norman Chu, once the lead of Hark’s 1980 Di yu wu men/We are Going to Eat You) realises the skull masked attackers are using poisoned weapons and sends in his girl fighters, as he forms an array on the castle steps, and streaked black doppelgangers emerge from Ho in the battle where each combatant has too much respect for his opponent to hold back.

I’m not sure that all this is an advance on the sensuous created decors and studied ridiculousness of the Chu Yuen movies but it’s certainly a fascinating comparison and a great movie experience all on its own.

If you’re looking for insights into the human condition, you’re in the wrong theatre but if you can deal with some of the wildest imaginations at play right now rush to the multiplex. Small screen won’t do it justice.

Editors Note: In Sydney the film is playing at several venues including one session a day in 3D at the Event Cinema in George Street. In its first week the film grossed $48,000+ on ten screens. Try to get there soon as on this basis it will be gone to make ever more room for Star Wars Rogue One from Boxing Day onwards.
Posted by Film Alert 101 at 04:13