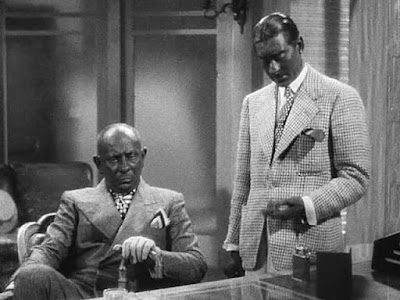 This is possibly the last movie acquisition of the year, while I still wait for the 4K/UHD disc of Goodfellas from Oz ($21AUD folks includes a regular Blu Ray), the Kino Lorber Lodger and a couple of other things.
Dominique Bernard Deschamps' totally insane Tempete (France, 1939) , aka somewhat less floridly Thunder over Paris, in which Erich von Stroheim (left!) does black face for the opening twenty minutes as a con man who peddles hair straightening ("Conking") snake oil to Harlem black folks in a daffy Studio backdrop set New York.
Erich has to be seen to be believed, but the blackface comes off as his scheme falls apart and he and business partner flee to Paris where they can rub shoulders with the likes of Marcel Dalio, Arletty and Julien Carette in a mind boggling nightclub sequence with long frocked dancing girls which itself signals Elina Labourdette's "Dancing girl"/Prostitute scenes from Bresson's Les Dames du Bois de Boulogne, but five years avant la lettre. Tempete was one of the last pictures made for the pre war Discina studio, literally months before it and the assistant director Andre Cayatte became fixtures with most of what remained of the French movie world in Occupied Paris at the newly formed Continental PIctures, set up by Alfred Greven in 1941 for the Gestapo which would perhaps ironically (or not) never have permiited such un Nazi PC material as blackface and a black audience subplot as part of their precious Aryan philosophy.).
Anyway Tempete is the sort of movie guaranteed to chase the blues away after a damnable year. The video capture was from a TV broadcast and the subs are custom. So a backchannel treat only. No known commercial DVD.

Editor's Note: David first put this up on his Facebook page and I, as usual, have pillaged it for the Film Alert blog.  After a post that the picture (above) was 'jaw dropping' David added this further comment.

(Stroheim) does little hippity hoppity dance movements with a cane across the set. You think he's going to break into a verse of Swanee. The post black face part of the movie is possibly even madder than the opening, made all the more bizarre with Arletty reprising herself from Le Jour se Leve.  It is completely astonishing. (So is Erich as the foot fetishist - natch - with the closet full of ladies wardrobe with which he seduces the girl in Siodmak's wonderful 1939 PIeges (the first version of Lured.) Eirch was very busy in those days. He has another doozy of a role in Delannoy's wonderful Macao l'Enfer du Jeu in which he "courts" MIreille Balin, and fights off Roland Toutain for her affections ("Andre Jurieux" to most of us.)
Posted by Film Alert 101 at 15:48