SCANDINAVIAN Film Festival kicks off with a bang with Bølgen/The Wave. 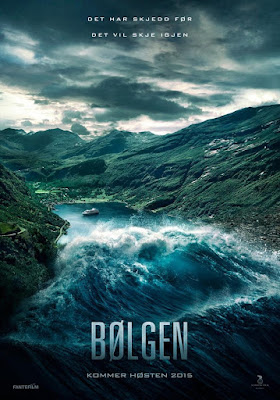 Starting with historical footage of Norwegian avalanche disasters just to give the piece gravitas, we're told that large areas are in danger, (“this whole damn country is made of rock”) and we get into the story of the surveillance centre’s scientist Kristoffer Joner, over the complaints of his growing children, packing up to move his family on to a North Sea Oil job, leaving their home in Geiranger, where very Nordic wife wife Ane Dahl Torp works in a mountain side tourist hotel.
We get a disturbing display from the centre's monitors of the rock slide area, with the constant peril of a landslide into the Fjord causing a Tsunami which would wash away the inhabited area above. Investigations reveal that the monitoring cables have been sheared off and Joner does the demo with ring binders suggesting dangerous rock slippage has been responsible.
Misleadingly, the usual skeptical authority figure, his boss Såheim, is contemptuous of the danger saying pushing the red alarm button would destroy the tourist season. However he and his offsider heroically go to check into the (convincing)  studio chasm that pours water and rocks on them.
So far the film has been routine family drama mixed with some suspect science, all
murkily filmed. However when the actual disaster strikes, the film becomes a grabber. The wall of thrashing grey water comes sweeping round the bend in the fjord, and alerted by the early warning system sirens, Torp has only ten minutes to pile the tourists into the yellow hotel bus which leaves without her when she goes back to retrieve their corridor skate boarding son Jonas Hoff Oftebro, shut off from the anguish by his head ‘phones.
Meanwhile Joner and their pre-schooler are barred from a rapid escape up the mountain road by stalled traffic and take to foot, with dad having to leave the girl with friends and go back to help a neighbour trapped between cars, piling into her vehicle as the torrent reaches them.
More heroics among the devastated post wave wreckage and under water.

The Romania-filmed effects work is impeccable and director Roar (2006's Fritt vilt/Cold Prey) Uthaug’s staging is impressive, comparing favourably with  Xiaogang Feng’s in Fei cheng wu rao/Aftershock or Clint Eastwood’s in Hereafter. This one was up for the Oscar, the big earner in it’s home market and the all time number three in the table of Norwegian film takings.
Posted by Film Alert 101 at 14:21