Miekkailija / The Fencer  (Klaus Haro, Finland, 2015)
With a smallish number of entries, SCANDI FILM FEST is everyone a winner so far. 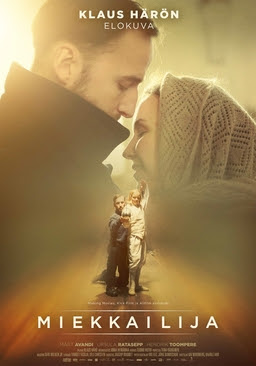 Klaus Härö's The Fencer launches into an unfamiliar subject. The formula elements of it are predictable but it manages to handle them impressively.
Getting off the train  in the small Estonian town in the fifties, we see new school teacher Märt Avandi from the back, as will repeat through out the film. He proves to be a fugitive from Stalinist oppression.

The bag he carries has his gear as a competition fencer and, when the head master tells him he’s supposed to run an out of class sports program and the local Military Air Base makes off with the skis he’s been repairing, he starts training the kids in fencing - against all odds of course.
Starting with Lisa Koppel, the little girl who had wanted to do ballet, most turn up because there is nothing else to do in the no facilities Soviet bloc town. They are working with twigs with corked tips and cardboard guards but young Jonas Koff’s grand father turns out to be a former fencer who still has his foil and mask and an appeal to a Leningrad colleague produces two menacing types demanding our hero. They however prove to be truckers bringing crates. Nice scene of the delighted kids discovering the fencing materials in them as they shower one another with wood wool.
Dealing with the winning young woman who Avandi has to buy tea, because no one stocks hot chocolate, also helps his ability to relate to the kids. She asks “Do you know how many of the children have no fathers?” and the question becomes an incentive to both abandon and the persist with the program.
The mean headmaster opposes the elitist sport but gramps speaks out for it at the parents’ meeting and the peasant types unexpectedly provide an endorsement show of  hands. The head has his Stalin mustached offsider root about in the Records Office till he finds our hero’s military history card. The headmaster’s speech, about his methods having got him to the authority he now has, manages to give the piece added resonance.
Avandi picks his team, Koffel and Koff prominent, to the fencing competition, though he’s been warned to stay away from Leningrad, where the military types are waiting for him in the company of the head, under the centre's Stalin mural.
Tracking camera and music turn the competition bouts into something stirring. Little Koppel saluting the mean opponent twice her size is irresistible.
Stalin dies and we get successive up beat endings.
The unfamiliar unit manage a strong cast along with an interesting simulation of the look of fifties Soviet movies, with their restricted colour palette and institutional decors, here shown as tatty.
Posted by Film Alert 101 at 01:06