On Blu-ray - David Hare discovers classic but near forgotten noirs 99 RIVER STREET, THE CHASE, TOO LATE FOR TEARS & WOMAN ON THE RUN 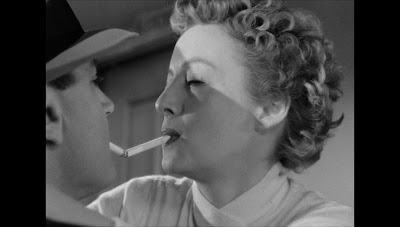 Evelyn Keyes in a really cokey performance rubs ends with the succulent Brad Dexter in Kino Lorber's luscious new Blu Ray of Phil Karlson's 99 River Street (USA 1953.) Cokey is only a part of the bits of code teasing delirium the director and his DP Franz Planer pull out of the bag to rescue a late period Noir into a fascinating two act jewel of day and night, with old fashioned flat studio lighting competing with long lensed night shots with comparably baroque Schufftan process for several giant maritime and city scape set pieces. Realism constantly slaps up against baroque and oneiric style.

One of several big set pieces is a three minute take with Linda/Keyes, solo in a Medium CU travelling shot exhorting Ernie/Payne to save her from a murder setup, with a KO reveal at the end of the take. Karlson sets these up like major chapter stops to pull any complacency out from an otherwise semi-routine fall guy narrative. Supreme hunk John Payne opens the picture with some highly visible CU boxing violence which will punctuate the rest of the movie, down to an amazing first person VO at the climax in which he half consciously directs himself through the denouement as he seals the fate of the men who murdered his louse of a wife.

The picture is so entertaining I didn't even notice the disc includes an Eddie Muller commentary which will happily oblige me to watch it again with an ear half cocked for this. Eddie's one of the few commentary givers I can listen to with unalloyed joy. And major kudos to Frank Tarzi at Kino who took over the programming and remastering of all this MGM/UA material for Kino-Lorber after his long fruitful period at Olive.

We've been flooded with a really fine Noir program this year from the likes of Warner and Koch Media and especially Kino with several revelatory new 35mm sourced scans from UCLA restorations/preservations of essentials like Pitfall, Too Late for Tears and Ripley's off the wall crazy masterpiece The Chase. Reviews of the last two follow now that I have a PC back with which I can function again after our seven weeks of paradise abroad. 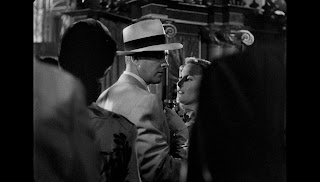 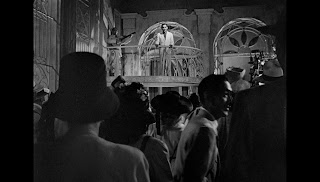 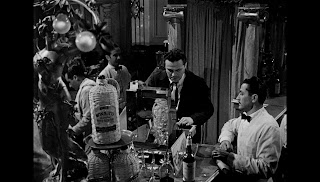 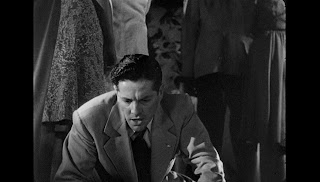 who "dies" in the arms of her lover Robert Cummings (Chuck Scott) during a phantasmagorical episode inside a Cuban Bar in Arthur Ripley's incredible Nightmare Noir, The Chase (USA 1946). Now rescued from unwatchable faded PD print hell and re-scanned by UCLA from a 35mm fine grain, and released this year on a fabulous Kino Lorber Blu Ray. A film as essential to cinephiliac life as any movie I could name.

Another United Artists property originally and also shot by Franz Planer, like the two Karlsons recently issued on Blu Ray, the movie constantly undermines logical and temporal narrative with complete ellipses in sequence and trenches of sadistic sexual perversity including the sublimely vile Steve Cochran fist hitting a nervous manicurist across the face and sexually taunting her while she cries in pain ("you love having your hand on a man's hair.. and his skin... you love it don't you...")

The only actor to render something approaching a calm performance is Peter Lorre whose own underplaying of the minor part of a lackey seems perverse in itself. The material was (extremely) loosely derived from a Cornell Woolrich story, and totally re-written by Phillip Yordan (of all people) with uncredited but obvious input from the mysterious Mr Ripley himself. The Chase must stand as a testament not only to Noir, but the enduring power of the avant garde and the resources of the small studio and the possibilities for complete anarchy and expression an artist like RIpley or Ulmer could take within the Noir mode.

It speaks to the picture's noteworthiness that Godard himself quotes the entire (slightly edited) one minute Havana night club sequence in his amusingly mordant and heartfelt video "letter to Thierry Fremaux and Gilles Jacob, in which he expresses his ongoing disgust with Cannes and their invitation to him to attend the 2014 festival. Enfant terrible to the end, with this short film also called "Khan Khanne" Godard's then 83 year old voice intones both address and remonstrances to Fremaux, and stitches together a series of grievances and obsessions which are in apparent disconnect to the massive assemblage of images, including quotes from his own work including King Lear, Histoires du Cinema and an early preview of his and Anne-Marie Mieville's dog, Roxy who will become the star of his very next film the 3D masterpiece Adieu au Langage from the same year..

In Khan Khanne however Godard quotes only one sequence from the American cinema, the aforementioned Cuban bar piece from The Chase. Here is the entire video of Khan Khanne, with the RIpley quote at 6m; 48s to 7m; 45s. Movies are made of this. It’s here on
Youtube 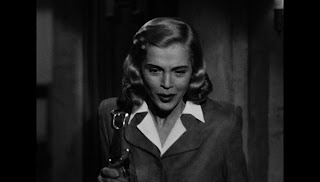 Lizabeth Scott (Jane Palmer, the Noir housewife from hell) despatches no less a cohort than Dan Duryea in a brand new recovery/restoration of Byron Haskin's fine domestic Noir, Too Late for Tears (USA, 1949.) Here is another of the seemingly unstoppable stream of rescued PD orphan Noirs making a major comeback from UCLA/Film Foundation sponsored 35mm elements this year. Too Late is the first such title to appear on the notable Flicker Alley label in Region A, and it will shortly make a Region B debut on Arrow in the UK.

The restoration is from a French 35mm dupe internegative (French title "la Tigresse", as only the French Can) and the remaining elements harvest extends to at least two 35mm dupe positives and a 16mm for completeness. No original materials for Too Late exist and a first gen 35mm interpos which Eddie Muller's Noir team were about to close in on vanished when the collector who was selling the print died, taking the secret of the material's whereabouts with him to the grave. Such is the life of a film curator and historian!
This title and Andre de Toth's Pitfall deliver Lizabeth Scott's two best performances. PItfall, another domestic Noir subgenre picture is based on the eternal triangle, centering on the flawed morality of Dick Powell's husband, with whom Scott's performance is perhaps her best "secondary" role as Other Woman and a female lead, albeit one devoid of malevolence, unlike her many Femmes Fatales. Here in a breathtaking swoop of reality she plays Arthur Kennedy's middle class housewife whose venality and sheer eye rolling greed when faced with the jackpot of a trunkful of mob cash takes her into the league of major crime and murder, disposing of Arthur Kennedy and the king of sleaze himself, Dan Duryea on the way through. 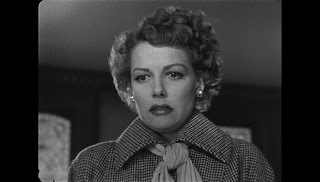 Also released by Flicker Alley in the same tranche is another missing in action Noir from 1950, Woman on the Run briskly, unemphatically and skilfully directed by Norman Foster a veteran of the great Charlie Chan series at Fox from the thirties. With a central female protagonist played by a compelling late career Ann Sheridan. The 35mm source for this is relatively pristine and the movie may be a revelation to anyone looking beyond well established Noir titles for a major late entry in the genre.
Posted by Film Alert 101 at 05:21