Graham Shirley, Chair of the Australian Media Oral History Group (AMOHG) recently circulated this note to AMOHG members. This fascinating account of how Wendy Borchers tracked down preservation, or at least duping materials for the previously thought-to-be ‘lost’ (in the preservation sense) made-in-Australia feature, Sunstruck (1972).  Sunstruck was an Australian/US/English co-production made with the assistance of the Australian Film Development Corporation. Its producer, Jack Neary, had also been one of the people behind Wake in Fright (1971).  Neary was a friend of Bobby Limb, and they had been the ‘N’ and ‘L’ of Wake in Fright’s production company, NLT Productions which co-produced Sunstruck with Immigrant Productions. It was no great surprise that Limb and his wife Dawn Lake were cast in supporting roles in NLT’s other Australian film, Squeeze a Flower (1971) as well as Sunstruck. 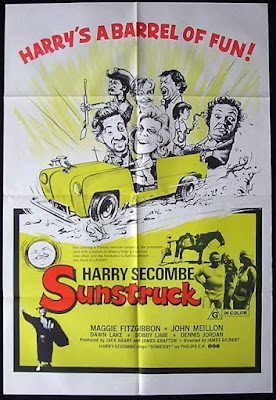 Wendy writes: Once upon a time I was house-sitting for my friend John Blogg (yes, truly and he has a sister, Josephine) at Balgowlah while John and his family were attending a reunion of teachers and pupils of Wongalea Primary School, which was located outside Parkes. (The school has since been reconstructed in the grounds of the Parkes Historical Society.)  When John returned to Sydney, he told me the story of how the character in the feature film Sunstruck, played by Harry Secombe, was modelled on his father, Cecil, whose first posting by the Department of Education, after migrating to Australia from England in 1953, was Wongalea, a real shock because, like the character in the film, he was expecting to be posted to a school at the beach.

When the family enquired as to how they could acquire a copy of Sunstruck, the librarian at Parkes Historical Society, told them the film had been lost forever.

I could not understand at the time why I had not heard of Sunstruck, since I earned a living as a film researcher, after all, but soon learned when I started searching, that it was released in late 1972.  Therefore, this meant that not only did I miss out on the most exciting election of all time, but I missed out on Sunstruck too because I was living in London at the time.

Anyway, of course I did not believe that the film was lost forever, saying such a thing to me was like waving a red rag at a bull, I could not believe this could be possible.

The NFSA only had a work print but they suggested to me that I contact Tony Buckley, the editor of the film, who suggested I contact the British Film Institute, who suggested I should contact Pinewood Studios (Canal + Image UK Ltd) and subsequently a DVD (with BITC mind you) appeared on my desk, 3 months after the search began.
.
I was super-excited, as you can imagine and so was Tony Buckley who was going to pursue the NFSA to acquire a copy for preservation purposes. (I had also learned that Pinewood hold original components for the film.)
Anyway, here's a transcription of a letter I received from Josephine Blogg, an English teacher and daughter of Cecil:

Just a note to thank you for your amazing 'tracking down' exercise, or should I say 'mission', in procuring a copy of SUNSTRUCK.  What a scoop! I watched it several weeks ago with Marie (who's now 98) Rose and John (children of Marie and Cecil), Lara (daughter of Rose) and Dave (husband of Lara) and we all thoroughly enjoyed it.  It was a real treat watching the famous Australian actors of yore, performing in an hilarious 'outback' romp set in the old Wongalea school.  Totally up there with WAKE IN FRIGHT and THEY'RE A WEIRD MOB!  We laughed all the way and interestingly, the younger generation particularly enjoyed it, seeming not to notice anything even slightly corny about the jokes, but viewing it as a quaint era of greater innocence, which explains the strange eccentricities of their aging relatives.  Thanks for giving us such a treat.  What a shame the film isn't available in the video shops - it would make a great HSC study under the title AUSTRALIAN IDENTITY!  Wongalea School on location certainly lived up to popular conceptions of the horrors of 'outback life'.  Actually the isolation was pretty accurate.  Pity the pub wasn't so handy when we lived there.  Dad would have loved it.