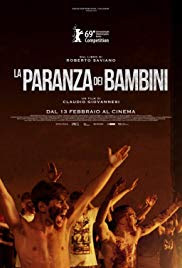 Roberto Saviano has been the go to man for authentic depictions of the lives of young criminals in Naples, the graphic rendition in word and picture of breeding grounds that make them what they are and the inexorable progress from innocence to corruption. He's been at since he published the novel "Gomorrah" back in 2006. That one was adapted into a hugely successful movie by Matteo Garrone in 2008 and then into an ongoing TV series beginning in 2014. Among those who have directed episodes is Claudio Giovannesi who now backs up as the director of the film adaptation of Saviano's second novel "La Paranza dei Bambini" rendered into that title in the Italian movie but called Piranhas (Italy, 2019) on the subtitle. Saviano also gets a script credit on the movie.

Quickly, this one is not as convincing as Garrone's film and a long way below other such studies most notably Jacques Audiard's A Prophet. Somehow or other the authenticity seems to have been drained away, the plot given too much emphasis, the kids too clean-cut and there is a mild romance inserted without much conviction but which allows some teenage sex to be on display.

Some of it is good. The opening where the standover men extract the protection money from Nicola's mother and sets him off on an arc of revenge is terrific but then we get mounting episode after episode (such as where a bunch of fifteen year old kids simply offer to help the local house arrested gangster boss. They ask to be supplied with guns and he gives them to him) ...well I suppose it happened and maybe I don't get out enough. The gang cruising the streets on their Vespas after they become kings of the hill looks great in a movie where the steadicam operator really earns his money. Maybe not enough of them meet a sticky end to be convincing. Compared to last year's kids in the Italian underclass becoming gangsters movie A Ciambra this one is a bit meagre... 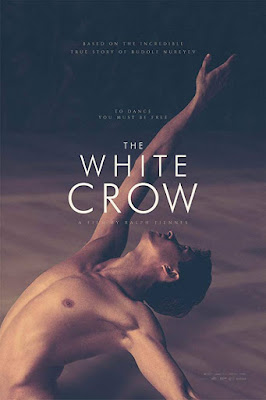 ...Sometimes you wonder about audiences...at The White Crow (Ralph Fiennes, UK/USA/Serbia, 2018) someone clapped with excitement when Rudolph Nureyev finally defected from the USSR. Goodness, was there any doubt...and the audience who got up and left as the credits started for the film over black and white shots of the great man himself dancing. ...Goodness, what were they there for...

....and Manta Ray is indeed as enthralling as Eddie Cockrell's notice said it is.

Wagner Moura's debut film Marighella was phenomena as much as art at least at its Sunday afternoon screening in the State Theatre. The stalls were half empty just a few minutes before start time and full by the time Moura appeared on stage for his intro. Just prior, a photo of Moura flashed up on the screen to advertise an extended Q&A afterwards got shrieks and applause. We were in for an enthusiastic time. The Brazilians in the crowd were right on top of everything happening. They knew, and maybe more in the crowd also knew, that the handsome Moura, star of The Elite Squad movies  and now seemingly slimmed down from the pudgy character he constructed when he played drug lord Pablo Escobar in two seasons of Narcos, a Netflix series which operates on about the same dramatic level as does this debut feature. Lots of graphic violence and cartoon bad guy cops. 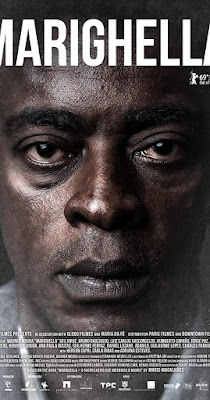 Which is to say in a very crowd-pleasing manner, especially if you enjoy seeing  the fascist/military forces running Brazil in the dictatorship decades after 1961 represented as venal, violent bastards up against the oppressed masses fighting this fascism (represented via what only ever seems to be a terrorist cell of about eight people, rather than a mass movement of resistance). Apparently the 'resonances' with Brazil today are clear.

The crowd loved it. It burst into shrieks of approval and applause at Moura's appearance on stage, at his announcement that his distributor has finally managed to book the film into theatres notwithstanding the official disapproval by the new President and again, wildly, at the end. I did rather expect them to join in Karaoke style when a song sung by the cast of the terrorist cell is inserted into the final credits but that didn't happen. Maybe it will when the film has its premiere in Brazil in November....