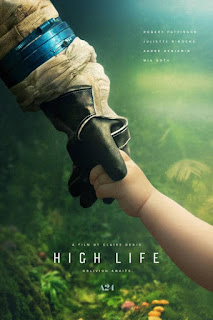 You’ve got to hand it to Robert Pattinson. Since making a name for himself and rocketing to stardom as Edward Cullen in the five films comprising the Twilight franchise between 2008 and 2012, the actor has carved out a determinedly eccentric career path for himself. He has appeared in films by David Cronenberg (Cosmopolis and Maps to the Stars), Werner Herzog (Queen of the Desert), David Michod (The Rover) and Robert Egger’s black and white horror fantasy The Lighthouse, which premiered at the 2019 Cannes Film Festival.

Pattinson has a number of upcoming projects, and can currently be seen in veteran French director Claire Denis’ (below) provocative new film science fiction film, High Life (her first in English). The actor stars as Monte, the last adult survivor of a crew composed of convicts being offered a chance at redemption in exchange for investigating a potential energy source near a far-flung black hole. 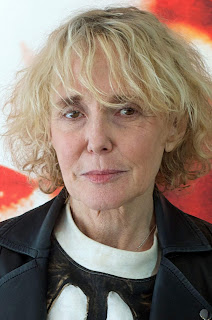 There’s another life on board, a baby (Scarlett Lindsay), to whom Monte is unquestionably devoted. In shards of flashback scenes, Monte’s relationship with the infant is explained with exposition co-starring André Benjamin, Mia Goth, Lars Eidinger, and, most indelibly in support, Juliet Binoche (all of whom, like William Holden’s doomed writer Joe Gillis at the beginning of Billy Wilder’s Sunset Boulevard, are dead when the movie opens).

Despite the genre trappings, this is very much a Claire Denis film, dealing as it does with the sinister precariousness of sexual relationships and—new to Denis—an elaborate production design at once infinite and claustrophobic. Pattinson is nothing if not committed as an actor, eschewing flashiness for intensity with an admirable restraint (Tom Cruise did this for a time early in his career, when he’d alternate more populist roles (Top Gun, Cocktail, Days of Thunder) with meaty parts for name directors (Martin Scorsese’s The Color of Money, Barry Levinson’s Rain Man, Oliver Stone’s Born on the Fourth of July and, perhaps most notably, Paul Thomas Anderson’s Magnolia).

Though lauded for his braver performances, Pattinson has yet to achieve the balance—and level of commercial success—this strategy accomplished for Cruise, but based on his level of commitment and a work ethic that has been applauded by all with whom he has worked (and who have been asked for comment), that recognition is soon to come. High Life is yet another moving, unusual and enthralling step in that process. As a late addendum, it’s just been announced Pattinson will take on the role of Batman for Warners, probably at least in part to cash in after so many indies.