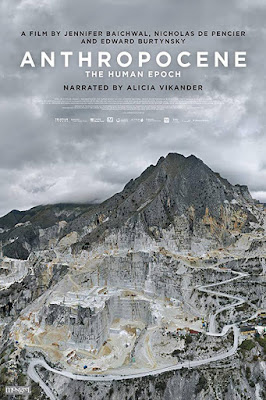 Let’s hear it for Global Warming! For the first time in living memory the State Theater has been habitable for the pit-of-winter Sydney Film Festival.

Presenting the opposite case we have Jennifer Baichwal, Nicholas de Pencier and Edward Burtynsky's  Anthropocene: The Human Epoch, shot in 20 countries on six continents and an account of what they describe as the sixth great extinction in the planet's existence.

We are shown the unprecedented scale of human intervention in the natural order, 10,000 elephant tusks (it doesn’t look like that) on fire in Kenya, nickel-copper-cobalt- palladium mine’s underground corridors in Norilsk Siberia, among the ten most polluted places in the world, potash mines in Russia's Ural mountains, lithium evaporation ponds in Chile's Atacama desert, the Dandora giant landfill garbage dump in Kenya, constantly scoured by human scavengers and marabou storks, a ten storey bucket-wheel excavator in the open pit coal mine in Hambach in Germany, the twin-bore Gotthard base rail line in Switzerland, world's longest and deepest  tunnel, bulldozer harvested Carrara marble quarries in the North Tuscany Alps or a text book juxtaposition of  mossy endangered old-growth rain forests on Vancouver Island and the stripped by loggers slopes they leave - all recorded on a three hundred to one ratio shoot.

IIt’s pretty impressive stuff though it’s not hard to imagine Alice Vikander’s austere commentary stripped out and replaced by one extolling the accomplishments of engineering. Throw in the factory doing Michelangelo's Davids.

In all this imposing Koyaanisqatsi spectacle, the odd human face registers - the African wildlife officer disturbed that the tusks being burned behind her represent elephants that she actually followed in the wild, a sculptor who prefers woolly Mammoth Tusks to Elephant Ivory or the armed rangers who know that the animals they are protecting fear them because they are men, like the poachers they are there to combat.

The makers proudly point out that the piece was shot and edited without a script and it hasn’t benefited from that. As the Yes Man told John Barrymore in World Premiere “It has size but it lacks shape.” What they are saying is important though hardly unfamiliar and it’s missing the impact that say Gold Is Where You Find It, No Room for Wild Animals or An Uncomfortable Truth had in their times.
Posted by Film Alert 101 at 06:45