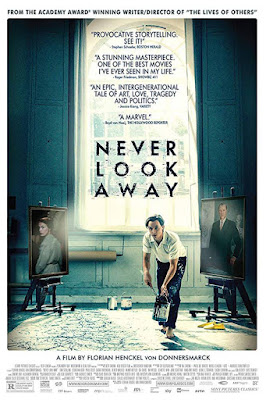 Watching the three hours plus of Never Look Away in the comfort, quiet and perfect projection of Sony's preview theatre in Market Street starting fresh at 9.00 am in the morning may well be something quite different to a screening of the film in the State Theatre beginning at 8.35 pm or even 6.30 pm at Cremorne. Maybe its best light will be at its 10.00 am session in the State. Just saying. This is a long movie and, as someone once said about Marie Dressler, it covers a lot of territory.

Before I saw it, I was alerted to a piece in the New York Review by Michael Hoffmann. Regrettably it's behind the paywall. An acquaintance read the Hoffmann piece and decided it was so negative about the film that an invitation to attend, first accepted, was foregone. Just saying... I decided to read Hoffman's piece after seeing the film.

The film is set in Germany between 1937 and 1968. At its centre is Kurt Barnert who from childhood displays an interest in and aptitude for making art. Swirling around him throughout this lifetime are  Germany's big picture politics - Nazism followed by Russian Occupation, by East German Communism and West German liberalism. Snaking through the politics at every stage is the presence of Professor Carl Seeband (Sebastian Koch) a Nazi doctor who overtly at first and covertly later  brutally puts into practice his views about the creation of a master race.

Seeband's life intertwines, in a rather continually contrived way with that of Kurt, the nice guy who finally finds success as a painter. No need to go into how all this occurs because it is a film written and directed with a near Dickensian sense of plot and character arcs, almost a variant of "Great Expectations" and that's its most winning element.

But, presuming you keep up with the political exposition, the deeper subject which I suspect most will know nothing about, is the life of the artist, from struggling with socialist realism to experimenting with common modern japes before finding finding a  personal style.  The sources on which Florian Henckel von Donnersmarck apparently draws are in fact closely connected to the lives of the German painter Gerhard Richter and his teacher Joseph Beuys. Both are major figures in modern German art and Richter at least was initially involved in the project but walked away and, according to Hoffmann, has only ever seen the film's trailer. You presume a German audience who saw this film under the title Werk ohne Autour/literally "Work without an Author", a title that makes sense as Kurt's art has a triumphant show, would be far more familiar with all of this.

As it is, we follow an interesting tale, full of coincidence and contrivance and taking its own sweet time to cover a momentous period in German history. It looks superb though there's a certain predictability about Caleb Deschanel's photography and I have to say that Hoffman's drawing attention to the film's naked bodies by repeating A O Scott's description of them as 'movie sex' is  rather good.