Once upon a time I was not so time poor and the SFF saw a lot of me. These days I have a ‘small’ festival, only a handful of pictures. But it’s all relative. On the second day of the festival I ran into an old friend who told me he was having a small festival too – about thirty pictures. I swallowed my envy and pondered my impatient deadlines and told myself there’s always next year, before heading back to the library.

Speaking of lobby and between session chat (always a highlight of any festival not by virtue of its quality necessarily but in its value as a kind of barometer…films to avoid, films to catch, audience controversies, a sorting of sane truth versus irresponsible self-serving hype), one veteran festival goer and filmmaker told me that after opening night he had spent long hours contemplating an email missive to a friend which he finally wrote and sent telling them that Rachel Ward’s Palm Beach was the worst he had seen in 60 years of opening nights. I wasn’t there but a few close associates who were, said the first night crowd indulged the film, thought it lightweight and digestible, even likeable. In cold print it looks like a smart commercial move – a social comedy full of warm and familiar faces having fun in a beautiful location all skewed to the 60+ demographic, one that is keeping cinemagoing alive, at least in Oz. And all the while I kept thinking what would have been the reaction if the film were in French?

One Australian feature I did see, actually the only one, was Mirrah Foulkes Judy and Punch, which was in Competition. In her on-stage introduction Foulkes called it ‘a meta-fiction’, and the line was delivered in a way that cautioned, ‘brace yourself now’. Foulkes, a fine actor, had a ‘come and get me' confidence that was refreshing in a forum where phony humility too often holds sway. It turns out that Judy and Punch is a weird mixture of tones and piss-take. A very black, sometimes funny fantasia about domestic and institutionalised violence where a little village in no-wheres-ville medieval times is held hostage to its own fears and prejudices. It was actually shot at Eltham with identifiably Aussie flora digitally erased.

The main characters are puppeteers, the originators of the Punch and Judy show, perhaps? This isn’t resolved. Nor is it important whether we guess who is struggling to make the big time. Alcohol, sex and murder, and a witch hunt of sorts put a crimp on this ambition. Meanwhile a scorned and savagely beaten woman plots revenge and redemption. It looks a little like a low budget Monty Python and the Holy Grail, and it plays like Shakespeare in Love but without the self-congratulation. I have no idea what to make of it right now but it’s hard not to be out of sympathy with a film that has the cheek to send up everything from Gladiator, to New Age activism and Game of Thrones. Still, there was an earnestness Judy and Punch  that was like lead, flattening the beguiling nuttiness. The leads Damon Herriman and Mia Wasikowska are fine, while the support cast are, um, well Python-esque, which confused quite a few punters at my screening. 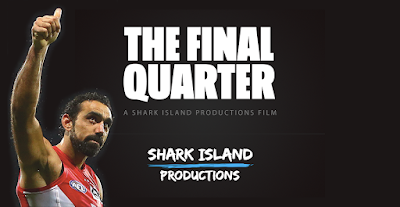 The audience at the premiere of The Final Quarter knew exactly what to make of this documentary about the last few harrowing years in the career of one of the greatest players Australian Rules football has ever produced, Adam Goodes.  An Indigenous man who had a sterling reputation in his community, both local and national, as a civic leader especially on issues of racism, Goodes found himself subject to intolerable pressure after an on-field incident during a football game in 2013.  A 13 year-old girl in the stands near the boundary line was barracking for the opposing side and called Goodes an ‘ape’, a well-known racist slur in footy circles, as much as in the street.

Goodes signalled to security and the girl was escorted out of the ground. In the turmoil that followed, commentators, the senior managers of the Australian Football League, shock-jocks, academics and fans debated the relative merits of Goodes’ actions. But Goodes sympathised with the young fan and saw it all as a larger problem that Australia was and is reluctant to face; its endemic racism and its embarrassed relationship with its First Peoples. In 2014 Goodes became Australian of the Year. Then the booing started; every time he took the field Goodes was booed and it did not stop till he finally retired before the end of the 2015 season. Part of the point of the Final Quarter is an attempt to re-examine what lay behind this kind of collective scorn.

Taking a nod perhaps from a tradition of essay docs like Emile de Antonio’s Millhouse, director Ian Darling and his team have elected to tell the Goodes’ story entirely from archive sources, going for an ironic effect that, at least for the SFF crowd, drew laughs and gasps, and later tears. The punters, many wearing the red and white colours of the Swans, Goodes’ former side, barracked as if they were at a game. For me the effect was cogent and powerful in the moment but on reflection the film is not so much courageous as self-assured in its righteous indignation. Which is to say, it tends to make fools out of the already foolish, like well-known conservatives who shoot themselves in the foot with numbing regularity.

Meanwhile Goodes emerges as the man we know; dignified, decent, gracious, smart. Still, perhaps the best thing about the Final Quarter is the way it reveals the discomfort and lack of sophistication that media players and managers have in dealing with racism. There is more than a suggestion here that racism thrives because, well, no one cares enough to seek out its targets in order to see how they feel. 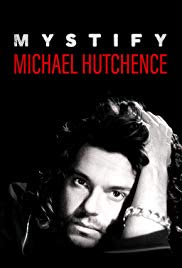 Richard Lowenstein’s Mystify: Michael Hutchence, another feature length doc which has already opened nationally, was in a way more satisfying, at least in terms of artistic punch, than Darling’s pic. Long in production, it is a really splendid film, that will doubtless be under-rated by virtue of the fact that Hutchence celebrity rock and roll life has been so often told in so many forms since his untimely death in 1997.

Lowenstein, a close personal friend of the musician, offers a tender, meditative, thoughtful film, eschewing the tabloid clichés. Clearly, its intimate mood is a rejoinder to the dominant rock-tragic narrative, which sees Hutchence’s suicide as just another casualty of a decadent life style endemic to the music scene.

Lowenstein doesn’t sentimentalise, or romanticise (Hutchence did indulge himself, no question) but he sets himself the ambitious task, usually the province of the literary biographer, of tracing the emotional development and inner life of his subject. In a style that has become increasingly fashionable since the success of Senna in 2010, Lowenstein has no talking heads; instead new interviews narrate relevant sections of the narrative laid over archive, much of it home movies.*

Many of the interviewees are Hutchence lovers, who, in heartbreaking detail reveal a shy, sometimes pretentious, often awkward soul, who seems more sweet, than swagger. Still, Lowenstein drives toward an agenda. He wants to chart the way Hutchence’s life ended, not as the consequence of romantic intrigue (which is still the popular and misleading narrative), but rather as the result of brain damage sustained in a street altercation in 1992. This, suggests Lowenstein and his witnesses, led to undiagnosed brain damage, depression and then addiction, violence and self-harm and finally suicide. Lowenstein clearly believes the cultureand its core values around Hutchence masked his very real medical issues (his bad behaviour = bad behaviour, and thus no one sought to intervene.) 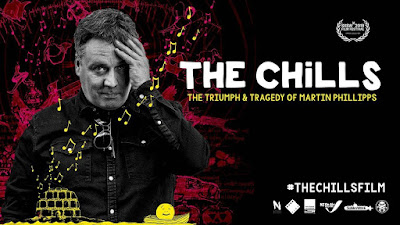 The Chills: The Triumph and Tragedy of Martin Phillipps from Julia Parnell and Rob Curry in New Zealand is essentially a solid piece of feature journalism on film. It has everything going for it; seemingly complete open access to its subject, a great sense of place, here, Dunedin on NZ’s south island, an interesting story –  and a portrait of an Artist, in this case Martin Phillips, founder, front man, lead singer and song writer of the Chills, who grew from a small Antipodean cult to a major cult in the UK and occasionally the USA…And yet, while always interesting, it never transcends the kind of editorial grasp on its content one casually expects from a seven minute public TV Arts feature.

In the interests of full disclosure, I am a Chills fan.  I believe Phillips to be a superb songwriter and the band’s various incarnations one of the glories of modern pop rock (the number of band line ups since they formed in 1980 are counted in multiple figures) so perhaps I am not quite the right viewer for the film. Which is to say, this is not a film about music, but the musical life. We meet Phillips as he was a few years ago, egregiously overweight, living alone (I think), in a small Dunedin cottage over crowded with decades of stuff (CDs, books, comics, Videos), in ill-health, indeed, faced with a life threatening disease, in part the legacy of alcohol and drug addiction, and all the while trying to ‘get clean’, make music and survive on very little money.

The films drama is focused on redemption; Phillips it emerges is a recessive character, friendly enough, but unwilling to share his muse amongst lovers, friends, and fellow musicians. Julia Parnell and Rob Curry never quite penetrate the mystique, even if there is a lot of crying from former band members and friends, and I can’t help feel there was an opportunity here to counterpoint the sensitivity and perception of Phillips the lyricist with his behaviour. It’s a nerds film with the nerdy obsession of ‘who did what to whom and who stole whose credit’, dominating proceedings. This has the effect of diminishing both the Art and all the Artists involved.

Martin Scorsese’s Rolling Thunder Revue has been reviewed on Film Alert already, but for the record I loved it and I would venture one corrective to the commentary. While it’s true Dylan dominates in spectacular fashion, one the films showstoppers is Joni Mitchell doing (at the time) a new number Coyote, which was met by the SFF crowd with a burst of applause.

The other great highlight for me, besides Scorsese’s picture, was Apollo 11, which is out in cinemas next month. Like the other strong docs mentioned here this jettisons narration and talking heads and is instead comprised of archive material – much of it never seen before and restored to such graphic brilliance one feels overwhelmed by the sheer scale of the images. 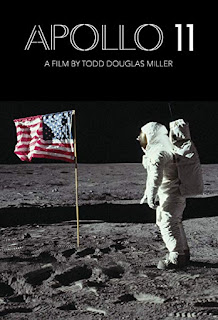 Edited, produced and directed by Todd Douglas Miller its achievement is to make a new immersive experience out of such a well-known historical event. No matter what one thinks of the achievement politically or scientifically it produces a sense of wonder that for those of us of a certain age, was almost child-like.

Peter Galvin is a writer and filmmaker. He is completing his first book,
A Long Way from Anywhere, the Story of Wake in Fright and the Australian Feature Revival 1968-1972.
Posted by Film Alert 101 at 10:06