I only dipped into this one when the couple I did see at eighteen bucks a throw proved unremarkable. It is of course possible that the ones I missed were sensational but the indicators were not good. 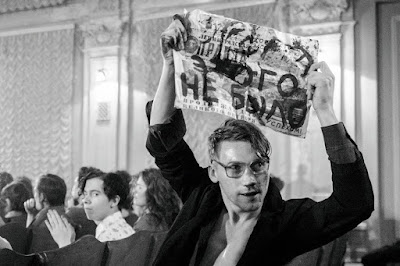 Krill Serebrennikov’s Leto/Summer (above) was a fictionalised account of Soviet rock star Victor Tsoi, an overlong and thinly characterised account of the 1980s Brezhnev era Russian rock scene. It focusses on the Leningrad Rock Club where well-dressed young people sit in orderly rows patrolled by security who dive in to take down the heart shape in the card that young Irina Starshenbaum and her girlfriend hold up to the musicians. The girls had to be snuck in from the Fire Escape by the musos. Despairing attempts of the venue manager to find them hiding in a men’s loo stall he was about to search are frustrated by a band member stepping into it.

All is not well with the cultural commissar’s attempt to show that they can lift Rock music out of the gutter.

The scene is enlivened by the arrival of Teo Yoo’s Tsoy  who’s talent they determine to showcase despite the frustratingly poor recording techniques available. Yoo takes an interest in Starshenbaum, which her rocker husband has to wear, along with looking after their baby

They hammer the idea of their idolization of American rockers (represented by a wall of LP covers) which is an interesting comparison with the Iranian
Sperm Whale 2.

This is all filmed in B&W scope with the odd colour moments - vertical triptych panels and the red of the apple or the rain soaked woman’s dress - very Schindler’s List. The realistic coverage is broken by would-be Dick Lester diversions, the numbers covered in white hand-drawn animated graffiti or Aleksandr Kuznetsov’s “sceptic” character coming on at the end of sequences like the fight with the abusive local on the train, saying “That never happened.”  His leaping out of the aftermath of the night of drunken excess into the projection screen is the film’s best effect and it would do better ending at that point.

Teo Yu is making a career out of his range of languages but here he’s dubbed by Denis Klyaver. Yu covered some of this ground in Seoul Searching and he and Starshenbaum are the only performers to make any impression.

The event also ran to a Lenfilm retrospective (the Kozintzev Hamletand Heifitz’ Lady With the Little Dog) which fielded two films by Vitaliy Melnikov whose work I wasn’t familiar with though Geoff Gardner assures me that his 1990 Tsarskaya okhota/The Royal Hunt is good. The details of Melnikov's career seem to defeat both the season booklet’s author and IMDB. I passed on his The Coach and saw Zhenitba/Marriage of 1978.

This one turned out to be a poor relation of Russian literary costume dramas like the 1969 Kirill Lavrov & Ivan Pyryev Bratya Karamazovy/The Brothers Karamazov or Aleksandr Zarkhi’s 1980 Dvadtsat shest dney iz zhizni/Twenty Six Days from the Life of Dostoyevsky, at its most interesting in the historical setting, probably using props and costumes out of the same warehouse as those.

Plot has Oleg Borisov (in Gherman’s 1986 Proverka na dorogakh/Trial on the Road) whose horse drawn sled is first seen pursuing a bonneted girl through the snow covered streets into the menacing courtyard. He acts as marriage broker putting forward a ragged selection of prospects for Svetlana Kryuchkova. Selected match Aleksey Petrenko (who has played Rasputin & Stalin in Russian films) wavers. However, Borisov proposes for him, setting up an immediate ceremony but, while Kryuchkova prepares by donning successive petticoats, her potential groom makes an undignified exit through the window. The house is left full of women who reproach Borisov. He has his carriage drive off into the night presumably headed for the whorehouse.

It’s a Gogol adaptation already filmed in 1936 by Erast Garin & Khesya Lokshina. The Russian speakers were falling about but I found the mix of realism and unfunny comedy tacky, not helped by the murky Russian colour of the day, the grain and lack of shadow detail defeating the transfer engineers. Being condemned to struggle with East German Agfacolor (Sovcolor), which they could never manage as well as its Nazi inventors, plagued Russian film makers.

The most interesting element in Zhenitba is the presence of long lived People's Artist of Russia (comparable to having a star on Hollywood Boulevard) Kryuchkova - not pretty but still appealing and dominating her scenes early in her career. Rather than this selection, it would probably be interesting to see more of her films or those of Zarkhi, Eldar Ryazanov, Gleb Panfilov and the rest whose work we suspect is superior but under-shown.
Posted by Film Alert 101 at 12:49