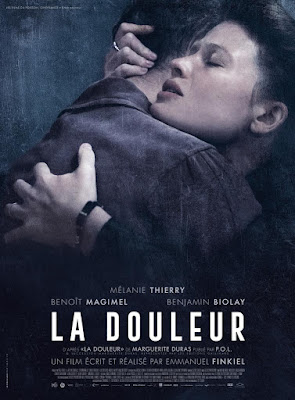 Translated into English as Pain or Memoir of War, Emmanuel Finkiel has adapted Marguerite Duras’s harrowing account of the French Resistance in Paris during the last days of the Second World War.
This cinematic version of Duras’s search for her captured husband Robert Atelme and his eventual return, near death and in a drastically emaciated state from the Dachau concentration camp, is France’s official entry into the Best Foreign Film category for the 2019 Academy Awards.
Completed in 2017 and released in France in January 2018 (where 350,000 attended), La Douleur has so far only managed further exhibition in Greece (box office $US41,000), Spain ($US101,000) and the USA ($US102,000).
Finkiel wisely re-orders the first two of Duras’s stories and starts with her relationship to the traitor Rabier, who collaborates with the Germans to assist in the deportation of French Jews to the concentration camps. Here,
Mélanie Thierry (Duras) and BenoÎt Magimel (Rabier) are magnificent - she dancing around his attentions, trying to extract news about Robert and he, coyly romancing, hoping she will betray the Resistance leader Francois Mitterrand (here called Francois Morland). Magimel’s performance is so impressive, it’s a better portrayal than Duras managed in her book.

In the second hour, Finkiel concentrates on the agony of Robert’s continued disappearance (as the search moves from Buchenwald to Dachau), and on Duras’s love affair with her Resistance comrade Dionys (Benjamin Biolay). The voice-over encapsulates Duras’s clear literary style conveying all the suffering, desire and anger of her emotions; her eyes simultaneously flaring with resilience and despondency.
She often watches herself, Finkiel placing two of her in the same frame, to show, in Télérama’s words “the reality of her emotions and their representation”. Thierry’s mesmerizing performance is a tour-de-force.
Along the way, wartime Paris is impressively rendered as we come to intimately know Duras’s apartment and visit cafes full of collaborators; train stations packed with gaunt prisoners returning from the camps; the Resistance fighters in situ; and the energized celebrations at Liberation.
There’s even a cinema screening Charlie Chaplin’s The Great Dictator, five years after it was first released.
Posted by Film Alert 101 at 14:24