I  managed a generally satisfying year of viewing that combined festivals and cinema going with home consumption of dvds and Blu-rays. Inevitably the latter has come to dominate, for all the reasons others have already cited about Sydney's film culture shortcomings plus my own preferences.

The main event for me was my third trip to Bologna for the Ritrovato festival in late June. Geoff, Mike Campi and Peter Hourigan have already commented on the 2016 program, as I did also (briefly) just as it finished. The screenings and discoveries made that have particularly stayed with me were rich and varied as i tried to juggle the many strands that tend to frustratingly overlap. Earliest of course were the Lumiere Brothers programmes restored by the Institut Lumiere in Lyons in conjunction with a fantastic exhibition of their contribution to the development of Cinema. The 100 Years ago strand  often clashed with other films, but I did see innovative 1916 work by Dwan, Borzage, Stiller, Emerson and Perret. The Laemmle Jnr Era at Universal strand was irresistible, with such highlights as a luminous print of Stahl's wonderful Back Street, the restoration of  two strip technicolor The King of Jazz, and Ed Cahn's chain gang melodrama Laughter in Hell  with such jawdropping sequences as a mass hanging of  the black inmates, and a breakout riot set in a nocturnal graveyard. I managed to see most of the 'alternative history of Argentine Cinema' already praised by Peter and Mike, with whom I fully concur, with a particular liking for Mas Alla Del Olvido (Beyond Oblivion 1955 Carril) with its "amour fou" story and Gothic atmosphere.

Tavernier introduced his (nearly 3 hour) Personal History of French Cinema which brilliantly embraces his favourite directors (Becker, Sautet), actors (Gabin, Eddie Constantine) and composers (Kosma) and eventually one hopes the even longer version  for French tv  will turn up on dvd.

There were impressive individual restorations seen like Tay Garnett's Her Man, the silent Henry King Stella Dallas, and the Pola Negri vehicle Woman of the World, while the Cineteca's ongoing Buster Keaton Project  enabled a delightful reviewing of Seven Chances. Add to these several  interesting titles from the Soldati strand and some welcome re-views of Jacques Becker, and you have a exhilarating if packed week.

The only other festival for me was Sydney's, which I only really sample with a 20 film flexipass. I pursued the Independent Korean film section, but my pick of the new films seen were Certain Women, Life after Life (Zhang Hanyi) and Desde Alla (Vigas). The various National Festivals that screen through the year  usually don't draw me.

I try to keep up with new releases at Cremorne Orpheum and the 2 Dendys , but do miss a quite a few that get short runs. My 'top five' for the year would be Paterson, Certain Women (SFF), Love and Friendship, Julieta, Elle, and Kubo and the two Strings (which makes 6). All these I thought were fully achieved works that i will look forward to seeing again. I also enjoyed and found stimulating whatever flaw or limitation they may have, The Revenant, Arrival, I Daniel Blake, Trumbo and La La Land. In the seen it all before but still enjoyable box go Nocturnal Animals and Hell or High Water. 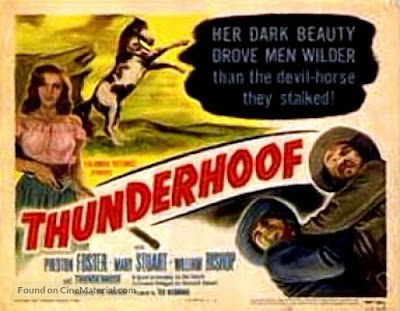 With no Cinematheque or other place for retros (brief Japanese Shindo and Imai season at NSWAG aside) I devise my own on dvd and this past year have revisited Boetticher and Aldrich, rounded up the films of Rudolph Mate, many of which I hadn't seen, and missing Joel McCrea and Randolph Scott Westerns. My favourite B picture discovery this year which I want to recommend was Thunderhoof (Phil Karlson 1948) which is a taut and tough three character Western and maybe the best of its subgenre, the wild horse capture movie.

My best Blu-ray acquisition this past year was the BFI's Carl Dreyer box set with its stunning prints, many extras, nearly all the Dreyer shorts. For real Carl Dreyer devotees, may I point out that the Danish Film Institute have issued a double of two rare Dreyer silents, Love One Another and The Bride of Glomdale, both very worthwhile.

As Barrie Pattison has recommended, the net and Youtube in particular provide a trove of rarities, some of them even in good prints and I'd like to cite DeMille's 1921 Forbidden Fruit, beautifully tinted, as one to check out. And if you like obscure B Noirs, they are legion; try Money Madness, High Tide, Jealousy (Machaty!), or Whispering Footsteps for starters. Copies quite variable in this area though.