The Current Cinema - Rod Bishop reviews Roberto Minervini's THE OTHER SIDE

Hillary Clinton unwisely referred to a voting constituency as the “deplorables”. She may have been surprised to learn some permanently drunk trailer-trash seniors in West Monroe, Louisiana once had nice things to say about her. Then again, Roberto Minervini’s The Other Side first screened in Un Certain Regard at Cannes in 2015, a good 12 months before the Democratic candidate alienated an entire demographic.

Minervini’s film, mostly documentary but with elements of reality TV and some premeditated narrative, is often reminiscent of the late redneck socialist Joe Bageant and his books Deer Hunting for Jesus and Rainbow Pie. Minervini shares Bageant’s ability to throw insight and humanism into empathetic portraits of some American bottom-feeders. 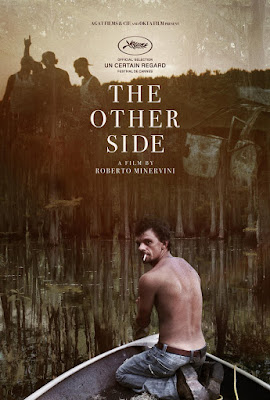 Minervini tells two stories. In the first, Mike Kelley plays himself. A struggling meth dealer and odd job man, Mike shoots up his girlfriend Lisa in both breasts, has sex in front of camera without embarrassment, injects a pregnant strip dancer and cooks up meth on filthy stovetops. And he hates the “self-centred”” Obama, “that nigger in the White House” with the “stupid motherfucking blacks who voted for him”.

Yet Mike and Lisa are clearly in love and Minervini, who is prepared to patiently wait for his subjects to reveal themselves, shows the delicacy, emotion and bonding of their love union. Mike is also poignantly sincere in caring for his dying mother. Having postponed a jail sentence until her death, he talks of binging out after the funeral before drying out in prison.

In the second and much shorter story, Jim leads an armed militia through shooting ranges and jungle patrols as they prepare for the day Obama and the UN declare martial law in the south. They are deadly serious. They hold cook-outs and wet T-shirt competitions, have planes fly past trailing “LEGALIZE FREEDOM” signs, a girl in an Obama mask gives a blow-job to a rubber penis and finally, eight militia fire automatic weapons into a burnt-out car with an Obama effigy looking out the side window and “OBAMA SUCKS” spray painted down the side.

If much of the last paragraph seems like the work of the demented, then consider the lucidity that Jim, who has “seen desert and jungle combat”, brings to this history lesson for his troops (even if the dates are a bit dodgy):

There will be many in the Washington “swamp” without such a good grasp of the blowback effect of American foreign policy. These juxtapositions between extremist delusion and political insight; between racism and love; and between hopeless drug addiction and care for family makes this both immersive and compelling.

Documentary filmmaking in the USA is possibly better now than at any time in the past. I suspect Roberto Minervini is relatively unknown in this country, but he sure deserves some attention.
Posted by Film Alert 101 at 22:37