On Blu-ray - David Hare tracks down a Spanish edition of Luis Bunuel's DIARY OF A CHAMBERMAID (France, 1964) 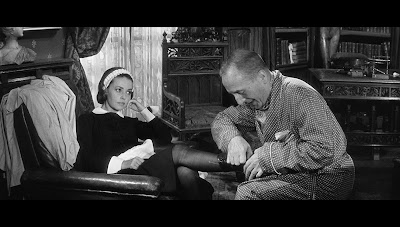 A l'interieure, a l'exterieure. Two irresistible images from Bunuel's savage comic masterpiece from Mirbeau's perverse, bitter 1915 satire of sex, class and revolt, Le Journal d'une Femme de Chambre which he re-stages to the late 1920s and the rise of fascism in France. The screens come from a new Spanish Divisa Blu-ray with alternate original French audio and Spanish dub, with Spanish subs only optional on original audio setting. So for Francophone viewers only.

The very beautiful HD master is from rights holder Studio Canal. This is the only movie Bunuel made in Scope and one wishes he had used it more often. He plays with the width to keep long takes running as he brings multiple characters at a time into the critical downstairs/upstairs group huddles in which a lot of the narrative is unravelled through gossip and lies. Scope seems to actually amplify the beauty of his mise en scene, if that were even possible with such a transparently direct and seamless master of film.


In a post Madman world, Bunuel and his piercing absurdist humanity is perhaps the best antidote currently possible for sanity. Only humor, and an eye that strips prejudice and hypocrisy bare can take the contagious shine of bullshit like the contemporary American monster away. I don't believe Don Luis ever made a bad movie although two or three of the mid fifties French pictures are less appealing to me than their earlier and later Mexican siblings for instance. Certainly his run from Viridiana in 1960 is unstoppable in terms of inspiration and consistency to the end, regardless of whichever producer or writer was privileged enough to work with him. This film does mark his first co-screenplay with the sublime Jean-Claude Carriere however.
I hope this lovely transfer from what looks like a crisp and sparkling 2K lands an English friendly release this year. it would be nice to see a period in which as many missing titles as possible get a release to give all of us a break from the actual horror of modern politics.

Editor's note: If you want to test the market Try this link if indeed you are curious enough and linguistically adroit enough to benefit
Posted by Film Alert 101 at 12:46