The multitude of readers who read this post from Barrie Pattison about Bertrand Tavernier's doco on the history of French film should have got to an editor's note about a curiosity in the career of Edmond T Greville, a minor master who plied his trade with great skill from the thirties to the late fifties in both France and England. Greville's reputation is still slowly building and one day when the Sydney Cinematheque opens we can look forward to a near to complete retrospective. In the meantime....

To assist readers this was the Editor's note I provided.Wikipedia advises further on the matter of the Pabst/Greville film Mademoiselle Docteur which acquired the English title Street of Shadows. "Street of Shadows is a 1937 French spy film directed by G. W. Pabst. An English-language version with exactly the same plot was filmed at the same time under the direction of Edmond T. Gréville, but with some changes in the cast." Now you know.

To which Sydney's supercinephile has responded. 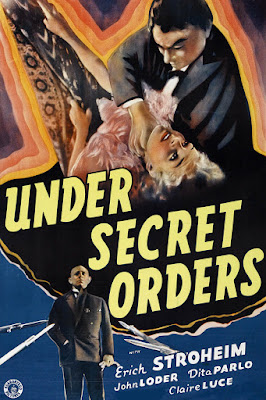 You can imagine how much I hate to contradict Wikipedia  but the Greville
Mademoiselle Docteur/Under Secret Orders (the last sixteen millimeter print Kodak put into distribution in Australia) is not a simultaneous version of the Pabst film but a later re-working of the same subject shot in England.

This was a quite common practice - using the same star and idea, knocking off the wide shots and inserting British performers into a later production presumably aimed at the American market, which all of them seem to have failed to conquer.

Think Jan Kiapura in Gallone’s 1935 My Heart Is Calling from his 1934 Mon coeur t'appelle or Harry Baur in Asquith’s Moscow Nights/I Stand Condemned  from Alex Granowsky’s Nuits Muscovites from the year before and Granowsky’s 1938 Rebel Son from his 1936 Taras Boulbe.