1. “I love you more than frozen Snickers, or Jeff Bridges, even sleep.”*

Can there be a greater actor of the last forty years than Jeff Bridges. A recent visitor to our Bondi Junction household had a prowl around the second hand DVDs and Blu-rays on offer down at the local Cash Converters. (The shop occupies part of the site that was once the Cinesound Studio.) Among the random finds was something genuinely obscure. The Yin and Yang of Mr. Go was made in 1970. Bridges was 19 when he appeared in it under the credit “Introducing Jeffrey Bridges”. He appeared alongside James Mason Broderick Crawford, Peter Lind Hayes, Jack MacGowran, Burgess Meredith, who also directed the film, Irene Tsu and the mighty Chinese film-maker, King Hu among others. Good for Trivial Pursuit for starters. The story line such as it was is recorded on Wikipedia as An American draft dodger and aspiring writer named Nero Finnigan (Jeff Bridges) becomes involved with the notorious Mr. Go (James Mason), an oriental organized crime mastermind. They conspire to blackmail an American weapons scientist into providing secrets to Mr. Go's organization for resale to the highest bidder. "The Dolphin" then arrives, who is an American CIA agent and James Joyce scholar, and is charged with recovering the scientist and his work by whatever means necessary. A revelation and no doubt many will find it hilarious. You can watch a fairly poor copy, here on Youtube.

Bridges then hit the ground running with The Last Picture Show (Peter Bogdanovich, USA, 1970), Fat City (John Huston, USA, 1971) and Bad Company (Robert Benton, USA, 1972). Since those days, based on the entirety of a career, more recent evidence of his recent Oscar success and his performance in David Mackenzie’s Hell 0r High Water, I can think of no American actor, not Pacino not De Niro, not Denzel Washington, who has got more runs on the board of great performances over the last four decades. But I digress...

In this latest film, Bridges plays Marcus Hamilton, a Texas Ranger. He’s only weeks away from retirement when he’s called upon, with his mixed race Mexican/Native American offsider Alberto Parker (Gil Birmingham), to investigate a series of apparently small time bank robberies in West Texas. The offsider stoically puts up with constant banter belittling his race. In one of the best scenes in the film the two law officers are in a cheap motel room watching a TV evangelist. Marcus unloads with all the bile he can muster about just what such a person is - absolutely spot on – before resuming the needling of his partner (“Soccer’s coming on after this.”) The switches of mood, the ebb and fall of a conversation that reveals much about both the relationship and about the liberal heart all come into play. Marcus is in fact not one of the good old boys. He can see right through them. Coming in a close second for effectiveness is the scene between Marcus and the waitress who sees the robbers. He is a step ahead of her at every moment and she resents it big time. Magic.

2. The spitritual influence of Elmore Leonard 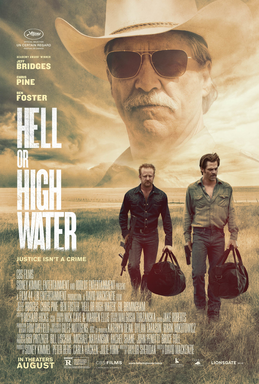 The gold standard for modern American crime movies might be triangulated into this rough group. There is the Highsmith strand where sinister dread and guilt come into play. Very hard to do and not attempted that often. One recent example that went after it was Joel Edgerton’s The Gift (USA, 2015) if you want an example of what I mean. There is the Westlake strand of comic misadventure among crooks. It has a Carl Hiaasen sub-branch. Regrettably the Westlake adaptations mostly fail to get anywhere near the master’s models. Then the big one. Elmore Leonard, and Hell or High Water may well be the greatest thing that Elmore Leonard didn’t write. The previous champ was, IMHO, Martin Brest’s Midnight Run (USA, 1988) though George Armitage’s Miami Blues (USA, 1990, based on Charles Willeford) is also exceptional.

When you go for this stuff, you have to have authentic characters, generally more than a little desperate. At least one of them will have a serious penchant for violence with no manners brought to bear. The cop will have wisdom, stoicism, and the benefit of decades of studying criminal behaviour. That’s how Marcus can settle on the one likely place where the robbers will turn up and only has to wait. The dialogue has to be gimcrack smart but austere and any humour should not be of the wisecracking stand up kind. Hell or High Water had moments when even the cynics in the preview theatrette were having more than a chuckle. Jokes about bank managers these days are good fun. And there are several bank managers, for whom we have varying degrees of sympathy, in the mix. Leonard writes spare stories of crooks and violence and specialises in that criminal underclass who never seem to prosper no matter whether they manage to get away with a robbery.

3. A Brit view of things
David Mackenzie is a Brit with a mixed track record. His mise-en-scene – no flash, no overemphasis on striking Texas vistas, would seem to tell us that he gets American neo-noir very well. This sub-branch on display –sunlit, open plains, mainly daylight, is a cool variation. The plotting, especially the final chase and siege is brilliantly executed. The pursuit by citizens in pickup trucks with their own guns to hand is very effective. In fact the whole chit chat about guns and those who pack them is a brilliant bit of sub-text running throughout.

4. Expectations Upended
There is a denied expectation of a second slam bang moment to cap off the siege on the hill. You get a misdirect here. (Spoiler alert) But the script veers away from this anticipated moment into a much darker scene when the transaction takes place on time and the disappointed bank manager has to go through the drill. An earlier moment with another obese specimen of bank management has one of the movie’s funnier lines.

5. Female Degradation
While it’s true to say that many of the males operate at a certain desperate level, the range of female characters – the embittered wife, the sassy waitress, the old waitress who has been serving the same limited menu for 44 years, the bank tellers caught up in the very violent robberies bespeak an entire sex ground down into the dust of despair at the lack of prospects, the disappointments, the insensitivity of the male.

6. The pervasive influence of the aura of Donald Trump
Coming out as it does in the dying weeks of a campaign by an alleged billionaire property developer to tell the American working and lower middle classes that they’ve been had by the powers that be and that they should vote for him to make things better, Hell or High Water is silent testimony to Trump’s appeal. The frequent “For Sale” closed and foreclosure signs that dot the background tell of a place where economic activity has just about ceased and only a few are going to ferret out some sort of living. I cant work out which way the movie might swing minds. Robbing banks seems a good alternative to the plunge into complete poverty and confiscation by the great and powerful and their many representatives, like Donald Trump.


* Lyric by Faye Greenberg from her song “And I hope I didn’t wake you”, music by David Lawrence
Posted by Film Alert 101 at 20:35