The Age of Shadows, a new South Korean film by Kim Jeewoon, has already racked up a fortune at its local box-office. Why would it not. It has Warner Bros to do the heavy distribution lifting and a plot that pushes a lot of buttons for the everyday Korean punter who might appreciate its historical nostalgia, anti -Japanese message, star cast and the massively skilful storytelling skills of its director.  Whether it can make the leap into acceptance by mainstream audiences abroad will be interesting to test. 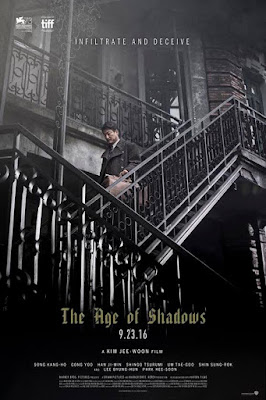 A couple of months ago, a Korean-connected distributor brought out another big hit Korean movie, Train to Busan  and watched it take over a million bucks at the box office notwithstanding that it didn’t get a review in any of the local mainstream media,  though readers of that left wing rag and Trump hater The New York Times would have noted a very supportive report. The Age of Shadows has been acquired by local art house specialist Madman which has at least gone to the trouble of putting on a couple of media previews. The Sydney screening was held on a Friday, a day  which I suspect is difficult to get the interest of the mainstream. Hence a handful of unrecognisables and moi were in attendance. It’s a hard slog out there even selling hit Kim Jeewoon movies.

Not that Kim should be entirely unknown. His digression to the US saw him wrangling Arnold Schwarzenneger back in 2013 when he made The Last Stand. I noted this back then as part of the aging stars phenomena in a post on an earlier iteration of Film Alert which you can find if you click here.   So, way back then my thoughts were very positive about Kim’s skills:

You get the impression that Arnold might think he still has more of this in him. If he does he would be well-advised to stick with the director of The Last Stand, the Korean action man par excellence Kim Jee-woon. It’s Kim who deserves the attention and probably most of the credit for making The Last Stand as good as it is. Or maybe good is too good a word. Effective may be better.

I assume that Kim got the gig because of his film The Good, the Bad, the Weird which I saw in Vancouver in 2008. It was already a huge success in South Korea and it filled up the biggest Granville cinema on three occasions. Its combination of Leone plot, the exotic locale of Manchuria in the 30s, the glee with which the action is choreographed, the twists and turns presented and Kim’s generally extravagant violent spectacle had everybody roaring and happy.

He was a good choice for The Last Stand, a movie which filters itself through Kim’s own penchants for action, the same Leone riffs and many bits and pieces from the classics, most notably Howard Hawks Rio Bravo (the scene in the police lockup where the sheriff assembles his modest gang including the local drunk/boyfriend of the sheriff’s female deputy) and Kurosawa’s Yojimbo (the scene in the middle of town where the gang forms a line for its first assault on the sheriff). The character of Dinkum, the gun supplier and wearer of exotic head covering is straight out of Kim’s own movie!

Since then Kim had a career stutter with a vile film called I Saw the Devil. His fans have waited patiently for something to follow up the mega hit The Good, The Bad and the Weird from back in 2008. And here it is.

Set in the late 1920s, the first act establishes the persona and place in the scheme of things of policeman Lee (Song Kang ho, perhaps the leading man of the current cinema and the go to fetish actor for Korea’s leading action film directors). He’s been ordered to clean up the local resistance and the opening sequence has him trapping its leader in a movie studio  backblock and, accompanied by perhaps a couple of hundred armed men, attempting to capture the fugitive alive. The chase is a thriller, effortlessly pitting the blurry fleeing figure against Lee and his men who come from all directions including, hair-raising leaps and landings, across the rooftops of the studio village.

The fugitive escapes and the plot is set up whereby Lee’s failure is used to increase the pressure on him. Interestingly, the dialogue is in both Japanese and Korean whenever necessary to show the divide. The plot then moves on to a conspiracy involving a resistance visit to Shanghai to acquire explosives. Then the hope is there will be a return to Seoul and a big explosion. But before all that, Kim puts almost all of his characters together on a train to Shanghai and lets the action, and the double, triple and quadruple crosses mount. The action is electric and as each new plot twist involving all the old reliables like recognising bad or good guys, passport control, hiding on board, mounts so does the tension.

Act three is the return, the melancholy ending that actually smacks of the kind of atmosphere that Alan Furst writes about in his spy novels set in Europe in the thirties and forties. Elegant, understated.

As for the star Song, what can you say. The face, not a handsome one by my judgement, has all the gravitas needed to play a character riven by conflicting loyalties. Its yet another remarkable impersonation by an actor who reeks of technical skill. A close-up of his face is enough to tell you about a character who spends the entire movie overwhelmed by guilt , his swirling emotions being suppressed as nationalist instincts fight with the duty he’s accepted in joining the enemy.

The Age of Shadows may not be the easiest film to follow. Its full of snaky plot twists, betrayals signified only by a close-up, returns to zero. It’s also full of anti-Japanese sentiment hidden behind the history. See it twice to clear up any confusion and to better enjoy all that skill on display from a director who seems to do it better than Hollywood and with far less reliance on special effects.

If there is a successor to Howard Hawks under consideration Kim would be the current nominee.

Opens November 3. For a peek at the very good trailer click here