I spent a lot of time this week watching films on demand, using Vudu to catch up with a few recent smaller releases which had caught my eye. We’re right on the verge of Australia’s Oscar release season, with The Revenant (Alejandro González Iñárritu, USA, 2015) hitting theatres by the time this article goes live. While I didn’t see any awards heavyweights at the cinema this week, I did take my nephew to another new animated film, which we both enjoyed very much. 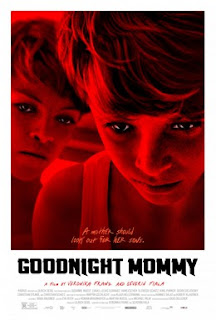 I started the week with the Austrian horror film Goodnight Mommy (Veronika Franz & Severin Fiala, Austria, 2015), which played at the Sydney Film Festival to some acclaim and even became Austria’s submission to the Foreign Language category at the Academy Awards. That was much ado about nothing, I’m afraid. The film comes from producer Ulrich Seidl, but contains none of the insight and very little of the social horror of his recent work as a director. Twin boys Elias and Lukas, played by identical brothers using their own names, move to an oversized new house with their mother, whose face is covered in bandages following an accident. After a series of perceived slights against them, the boys start to question the identity of the woman under the bandages. An exciting opening scene involving a chase through a cornfield places the best of the cinematography up front, but from there on the visuals become deliberately sterile. The film is either too careless with its secrets, or it deliberately gives one of its late-game reveals away very early. I’m not sure which it is, but secrecy is really all Goodnight Mommy has going for it, so this undermines the film badly. This is too shallow for the art-crowd and too tame for the horror fans. I can’t recommend it at all. 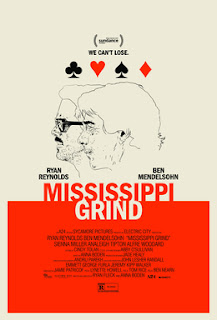 The best film I saw this week was Mississippi Grind (Anna Boden & Ryan Fleck, USA, 2015), which contains much gambling, but doesn’t quite fit into the tired mould of the Gambling Film. Ben Mendelsohn is quickly becoming my favourite Australian actor, and he is exactly the right person to play Gerry, the sad sack gambler who is drowning in debt, and has just about accepted his fate. That is, until he meets the chirpy, talkative Curtis (Ryan Reynolds), who seems like he doesn’t need the money, and just likes the conversation around a poker table. The pair team up for a casino-crawl through the American South, hoping to eventually make enough money to get Gerry out of trouble. Along the way, they take in the sights and sounds, with a particular focus on live music. They talk about their situation, their pasts and their aspirations for the future, and whatever else comes to mind. This friendly road trip element is enough to make the film worth your time, and I really enjoyed it. The plot briefly veers into the standard formula of desperation and failure, but then doesn’t so much resolve it as throw it out the window in a burst of gleeful fantasy. As the film keeps repeating, it’s all about the journey, not the destination. 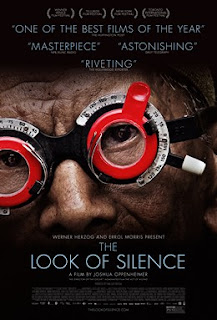 The Look of Silence (Joshua Oppenheimer, Denmark, 2014) is a companion piece to Oppenheimer’s Oscar-nominated documentary The Act of Killing (2012), and like that film, it focuses on the government-sanctioned murder of almost a million Indonesians. Those killed were broadly and falsely labelled ‘communists’, as though that would excuse their extermination. The term basically applied to anybody the government wanted dead for any reason. Since this happened, those responsible have remained in positions of power for another fifty years, and as we saw in The Act of Killing, they still believe their actions were necessary and heroic. The 2012 film explored this history through the eyes of the killers themselves, but The Look of Silence shifts focus to a man whose brother was one of those murdered. He directly confronts those responsible for the killings, revealing his familial connection to the events, which remains to this day an incredibly dangerous thing to do. The man is never identified by name, and many of the film’s credits are listed anonymously. It’s a strong film, and a frightening one, made only slightly less so through our familiarity with the previous film. The shock of the situation has passed, and all that remains is a crushing sadness. 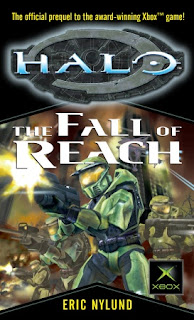 I followed this sobering film with something much, much less substantial. Halo: The Fall of Reach (Ian Kirby, USA, 2015) is (stick with me here) an hour-long animated film based on the first half of a novel which itself serves as the prequel to a 2001 video game. My love for the Halo games runs deep, and I have read and enjoyed the novel The Fall of Reach (Eric Nylund, 2001). This cartoon is junk. The story is sci-fi, and focuses on a group of children, kidnapped by Earth’s united government to be physically modified and trained as super-soldiers. Their planned use is to fight insurrectionists, but they are thrown into the middle of an intergalactic war when humanity is attacked by a group of militant alien religious zealots. The voice work here is droning and emotionless, and the animation is poor. The film takes the format of a motion-comic, consisting largely of barely-animated still frames. This looks particularly bad during the action scenes. I’ve already written more than this film deserves. I am exactly the target audience for this thing, and I hated it. 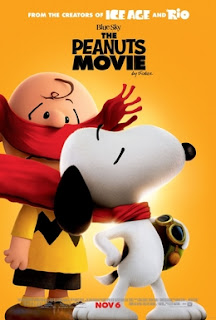 My only cinema trip this week was a local screening of The Peanuts Movie, the unwieldy Australian title card of which actually reads Snoopy and Charlie Brown: The Peanuts Movie by Schulz (Steve Martino, USA, 2015). Jokes about branding-gone-mad aside, this movie serves as an excellent tribute to a cast of characters I’ve followed since childhood, and it’s a good entry point for a new generation. The animation, while visibly three-dimensional, mostly takes place on a flat plane, exactly mimicking specific iconic poses from the original comic strip. In fact, I recognised almost every frame of this film from the original artwork. The story also feels like it could have come directly from the source material. It’s all about Charlie Brown’s lack of self-confidence, and about his good nature in spite of this. Specifically, he falls in love with a girl who moves in next door, and spends the whole movie trying to make himself talk to her. The film hits all of the nostalgia beats, using every common scenario from the comics. Snoopy is both an aspiring novelist and an imaginary fighter pilot, Lucy runs a 5-cent psychiatry booth and so on. It’s all very familiar. It is, perhaps, too familiar to really strike out on its own as something new, but there’s something to be said for just sticking to what works.
Posted by Film Alert 101 at 22:44