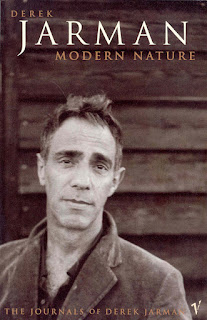 When the Engilsh filmmaker Derek Jarman died in 1994 he left behind many unrealised projects but none more bizarre and tantalising than the ambitious futuristic drama Neutron which was to have been filmed following The Tempest (1979) with David Bowie and Steven Berkoff.
With Bowie's participation executive producer Don Boyd provided script development funds and attempted to raise the larger budget that was necessary to realise the post-apocalpytic world as visualised in Jarman's detailed sketches, contrasting the idyllic environment of Aeon (Bowie) , rock singer,with that of Topaz (Berkoff), an urban guerrilla.His plan was to make most of the film in an abandoned power station.

Inspired partially by Carl Jung's book Aion (1951) and Orwell's 1984 he described the film as " an attempt to rework the Book of Revelation as a piece of science fiction " Jarman travelled to Switzerland to meet with an initially enthusiastic Bowie. But the project undoubtedly lost momentum when Bowie left, the latter blaming a lack of funds but that may have been an excuse to diplomatically sever his involvement. Jarman persevered with various co-writers from 1979 to about 1983

In a 1999 press interview Bowie expressed regret about Neutron's demise and his admiration for Jarman's ' scary piece of work ". Here's a bizarre account on the planned film's background which makes much of Bowie's interest in the occult and an odd meeting . The ever enigmatic Bowie dismissed all of this as ' urban myth ". " Jarman wanted to do a film called Neutron. Prospects looked good financially, as he had lined up an impressive cast-list and who else than David Bowie wanted to play the lead. The two had a meeting in Jarman’s apartment and everything seemed hunky-dory. But then Bowie suddenly started chain-smoking and Jarman noticed that his guest was getting more and more nervous and was shooting furtive glances at one of his bookshelves, plus some drawings on the wall. Then suddenly, in the middle of a conversation, Bowie stood up, made a lame excuse, and left. Twenty minutes later Bowie’s driver and bodyguard came back to the flat and said that the master had forgotten something and then proceeded to remove the cigarette stubs from the trash ...
Needless to say, Bowie backed out of the project, which then collapsed. Jarman never did have the time to explain that his John Dee books and the Enochian squares on the wall were souvenirs from the time when he made Jubilee, a film in which Dr. John Dee (1527-1608), Elizabeth the First’s astrologer, had been one of the main characters. Dee’s “Enochian” system of magic, with its complex magical diagrams, was an important part of the Golden Dawn and also of Aleister Crowley’s teachings. Angels had communicated their knowledge to Dee in a strange language, Enochian, referring to Enoch of the Old Testament, who spoke with God. Here is one of Crowley’s “secret teachings”: “All bodily excrements, such as cut nails and hair, should be burnt; spittle should be destroyed or exposed to the Sun; the urine and faeces should be so disposed of so that it is unlikely that any other person should obtain possession of them.” Yet still, in March 1987, Bowie was insisting: “I never was in the occult”... but for years he sang about the “Jean Genie” who “keeps all your dead hair for making up underwear.”
-- From "The Laughing Gnostic: David Bowie and the Occult", by Peter-R. Koenig, Ultraculture Journal One, 2007
Below are links to concept art for the proposed film which, if realised , might have gazumped Terry Gilliam's Brazil which was released in 1985 .
https://vimeo.com/122212053 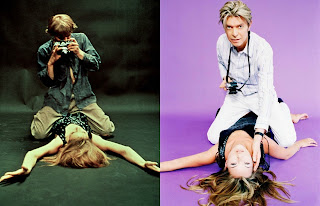 Number 12
Blow-up I'm not suggesting that Bowie was ever a contender for Antonioni's most unconventional of thrillers Blow-Up (1966) but he was an admirer. In a serendipitous coincidence the seen-it-all fashion photographer played by David Hemmings drives his car through the West End of London, stopping at Heddon Street in Mayfair ,not far from Piccadilly Circus This site
became the location for the 1972 album cover of the landmark The Rise And Fall Of Ziggy Stardust, commemorated now by a simple plaque.

In 2003 Bowie and model Kate Moss,a longtime friend,most posed for a photo shoot in Q Magazine which paid homage to Blow-Up. Below on the left the 1966 original with Hemmings and model Veruschka, on the right Bowie and Moss.

PHANTOM OF THE PARADISE (1974)
Before the diminutive Paul Williams was chosen to play the part of the record producer Swan the scuttlebutt named Mick Jagger and then Bowie.

TOMMY (1975)
Was Bowie genuinely considered as a casting option,playing the Acid Queen, a role that was eventually undertaken by Tina Turner ?

THE SERPENT'S EGG (1976)
Bowie was was mentioned to play the role of Abel Rosenberg that eventually went to David Carradine. Richard Harris , who had just completed Orca for Egg producer Dino De Laurentiis came down with pneumonia and was replaced by Carradine .

Number 14
STRANGER IN A STRANGE LAND (c. 1973)
In a fraudulent press report Bowie was announced as the star of Robert Heinlein's Stranger In A Strange Land . In the biographies I have read the consensus seems to be that this was , according to Bowie, a 'ploy' and a successful one at that to attract movie offers.Before long he would be cast as The Man Who Fell To Earth, another manifestation of the Ziggy Stardust otherworldly persona he had perfected with such great alacrity.
https://davidbowienews.wordpress.com/2012/06/20/ziggy-stardust-inspiration/

Number 15
Here's the craziest of them all by a country mile. A Bowie biopic to be directed by Ken Russell from a screenplay by William S. Burroughs. Bowie admired Russell's work greatly, the pair first met on the set of Mahler (1974) and exchanged mutual pleasantries . And while we're talking fanciful projects how about Ken's Hamlet teaming Bowie and Elton John ?

Number 16
One theory about Elizabeth Taylor in her later years is that she befriended the likes of Michael Jackson and Bowie so as to curry favour with the younger set and to find new avenues for her own self-promotion. A more prosaic theory is that she actually enjoyed their company. Since meeting him in 1974 Bowie and Taylor got on like a house in fire and she suggested to him he might like to consider a supporting role in her latest acting venture.veteran director George Cukor's remake of The Blue Bird, a parable about the meaning of life and the achievement of true happiness, to be filmed in Leningrad .The film turned out to be an unmitigated disaster which drained the spirits and energy of all involved including 20th Century Fox which lost a bundle. But none of this affected Bowie who astutely declined to be involved, citing boredom. His quoted assessment after reading the screenplay : " a very,dry high fairytale with nothing to say " .
As a curious footnote the only market in the world where the film took any money was in Melbourne,Australia where an enterprising independent exhibitor David Wayside assiduously promoted the film at his Mayfair Cinema in Collins Street in the heart of the city.. Leading theatre chain Hoyts , which had first look rights on Fox product, passed on the film and he cleaned up .
Here's a curious background account from Hollywood Reporter :
Elizabeth Taylor had hatched a plan: She wanted Bowie to audition for a role in her movie, The Blue Bird, which was due out the next year. So she asked her good friend, photographer and Faye Dunaway ex Terry O'Neill, to set up a meeting. The noted British lensman arranged a get-together at director George Cukor's house in Beverly Hills, to which the gender-bending musical mastermind showed up two hours late. And, as one can imagine, Dame Taylor was not a lady who liked to be kept waiting.
"Liz was pretty annoyed and on the verge of leaving," O'Neill told London's National Portrait Gallery of the incident. "But we managed to persuade her to stay." 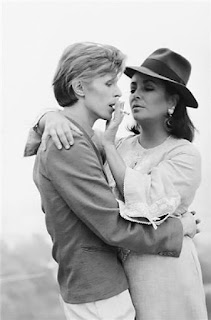 To break the ice when Bowie finally arrived, O'Neill started snapping photos, which resulted in the now-iconic series of the unlikely duo sharing a cigarette. Taylor got over Bowie's lateness, though he didn't end up in her film after all. And still today, the linen keyhole tunic and felt fedora she wore to take a business meeting shows us how understatedly cool the movie star was away from her sequins and shoulder pads.