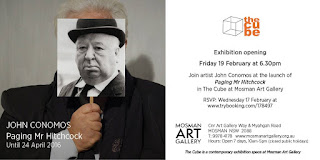 Paging Mr Hitchcock is a poetic performative video installation work by the notable Australian artist John Conomos. This new artwork is essentially a homage to the artistry of the legendary Hollywood film-maker Alfred Hitchcock, known globally as the ‘master of suspense’. However the artwork also traces the artist’s own post-colonial narrative and autobiographical trajectory as an artist, cinephile and writer who has been impacted by migrancy, fragmentation, vulnerability and trauma.

Below is John Conomos's introduction to his exhibition which has its official opening on 19 February 2016.

Every art is about the longing of One for the Other. Orphans that we are, we make our sibling kin out of anything we can find. The labor of artist is the slow and painful metamorphosis of the One into the Other. Charles Simic

Man is least himself when he talks in his own person. Give him a mask and he‘ll tell you the truth. Oscar Wilde

Alfred Hitchcock, like Luis Bunuel and Fritz Lang, was a film director that spanned the best part of film’s history in the last century, from the silent era in the 1920s till the 1970s. All three directors had this much in common with each other, amongst many other things. And truth be told, Hitchcock himself had the highest admiration for Bunuel from an aesthetic and technical point-of-view: both these directors also had a surreal outlook on the world. Why ‘Hitch’? This is how he was colloquially known through the mass media – particularly the Fourth Estate and later in his life through his extraordinary commercial success with his Alfred Hitchcock Presents television shows of the late 1950s and early sixties. It was these television shows in particular with the filmmaker’s famous characteristic droll introductions to each episode “Good evening. Tonight’s little entertainment concerns…”.

It was with Hitchcock’s television shows besides, my earliest indelible cinematic memories of seeing his Rear Window, Vertigo and later, Psycho in our local cinema in Marrickville in the 1950s/60s, that I became familiar with his dazzling, suspenseful ‘Rubik Cube’ oeuvre of a cinema that at its core posed deep resonant existential and moral questions about our Manichean nature as human beings. And how life itself (especially in its everyday prosaic fabric) profoundly underscores the ambiguity and horror of the well-known saying “still waters run deep.” With Hitchcock this was always the case: things were not as they would appear at first glance. Hitchcock saw himself as a master artisan or craftsman rather than as an artist. He firmly believed that cinema was the 20th century’s most innovative art form, but he regarded himself as a commercial filmmaker of highly polished mass entertainments. 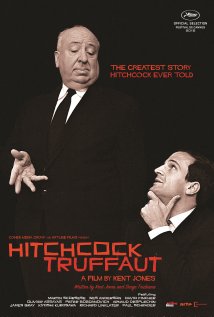 Craft before art was Hitchcock’s cardinal belief as a filmmaker. Despite the unbridled enthusiasm of the Cahiers du Cinema group of critics (Jean-Luc Godard, François Truffaut, Jacques Rivette, Claude Chabrol and Eric Rohmer) for Hitchcock - which was in radical contrast to the qualified respect Andre Bazin had for the director - Hitchcock found the comparison with artists flattering, but preferred to see himself as a craftsman of technical virtuosity. These ideas of his were mostly at the fore of the far-reaching interviews (six days) that Truffaut and his collaborator and interpreter Helen Scott conducted with the filmmaker in the mid 1960s. The result of this landmark encounter between these two filmmakers manifested in the 1966 book Cinema according to Hitchcock that clearly had such an impact on subsequent cinephiles and aspiring filmmakers. Truffaut regarded this book as his unique “film–book” because of its explicit storyboard look and meticulous details about how Hitchcock conceived and shaped his films. This is a subject which, incidentally, is explored by the American critic Kent Jones in his new film Hitchcock/Truffaut that he co-wrote with Serge Toubiana, who is presently the president of the Cinematheque in Paris today and premiered at the last Cannes Film Festival.

In any attempt to assess Hitchcock’s achievement as a filmmaker, the intricate relationship between both the artist and the meticulously self-staged persona (the droll, dead-pan English observer of human foibles), and his oeuvre and its legacy to contemporary visual arts, we need to contextualise Hitchcock’s art within the larger cultural, economic and political forces that shaped it. Hitchcock’s American films not only testify to the filmmaker’s own ironic encounter with American cultural life and its diverse public spaces, popular cultural and literary narratives, as well as its cultural and ideological tensions and textures, his films clearly suggest that the filmmaker had a supple and adroit understanding of cinema as a major modernist cultural form of visual representation, and of its key role in reconfiguring the cultural, social and emotional life in the American public sphere.

Hitchcock’s delightful cameos, in essence, are such self-mythologizing jokes and they perform a vital self-reflexive role in the aesthetic economy of his movies often acting, as the American film critic David Sterritt once put it, as “ironic punctuation marks.” But they are also important for their playful multilayered illusion – breaking characteristics . They also are the least discussed aspects of Hitchcock’s cinema. There has always been a tendency to see them as being not so significant in their aesthetic, dramaturgical and narrative implications. The question we need to ask of them what are they doing here in his movies; what is Hitchcock trying to achieve with this “Where’s Wally” humour of his? Are his cameos in anyway detracting from the aesthetic and technical aspects of the suspense in his movies? Remembering that Hitchcock once said, how he played his audiences, like an organ.

According to Jason Holt (1), Hitchcock’s cameos that numbered over thirty five first appeared in The Lodger (1926) and despite their sporadic appearances afterwards they started to surface more consistently by the 1940s.  Apparently, one day Hitchcock did not have enough extras in one of his movies so he decided to step in as one of them. Soon audiences began to recognise his portly presence and they started to anticipate them in his subsequent works. Hitchcock, ever so pragmatic and an astute showman, realised that they in themselves were commonly regarded as a vital signature of his existential horror cinema so he obliged his audiences ever since throughout his oeuvre. Hitchcock did not originally plan to keep appearing in his movies, he simply seized the opportunity to do so because of his audiences ‘expectations. Some commentators have also speculated that one reason why Hitchcock continued his cameo appearances was that he regarded actors as ‘cattle’ and he wanted to perversely remind his actors that anyone can act and, at the end of the day, what he was doing for a living was not some sacred, transcendental and egotistical activity.

As he once famously said to Ingrid Bergman “Ingrid, it’s only a movie.” This utterance at its core is emblematic of how the director regarded filmmaking as a craft rather than an art form. In a tour de force fictional piece Fat Man My Love, by the prolific American novelist Joyce Carol Oates, we have an extremely vivid, rhythmic and memorable diagnostic stream-of-consciousness account from Tippi Hedren’s point-of-view (one of the director’s late Ice Blond beauty archetypes in Marnie and The Birds) of the director’s Jesuit shaped pathology as the ultimate fetishist, fantasist, obese, gluttonous, sadistic, smirking, mama’s virginboy joker, the witty “Zombie Buddha” with the aching hole in his belly. ² Who lived in his head full of dreams, obsessions and knew and lived his movies script perfect. Given the vast and ever-expanding literature on Hitchcock, the many different constructed Hitchcocks - Hitchcock, the moralist; Hitchcock, the modernist-formalist; Hitchcock, the aesthete; Hitchcock, the post-modernist, etc - how do we locate him in the context of the triadic formulation (realism–modernism–post modernism) of cinema history?

If cinema is the 20th century’s paradigmatic art form, is Hitchcock one of its greatest artists? For Slajov Zizek, Hitchcock paradoxically incarnates all three categories of the aesthetic-historical triad, and for Gilles Deleuze, Hitchcock, through framing, camera movement and montage, represents, in the tradition of English empiricism, ‘the filmmaker of relations’ par excellence, the last of the classic movement–image directors (paraphrasing Deleuze) and ‘the first of the moderns’. ³ John Conomos 30 December 2015

John Conomos works and lives in Sydney. He is currently an Associate Professor, Principal Fellow, The Faculty of the Victorian College of the Arts and the Conservatorium of Music, University of Melbourne. Conomos is a New Media Fellow (2000) of the Australia Council for the Arts and has been exhibiting and writing since the late 1970s.
Posted by Film Alert 101 at 18:18