I didn’t watch anything at home this week, but I made two trips to the cinema, and I made them both count. As is usual for an Australian January, the Oscar-nominated films are pouring into cinemas after being held back all year. I find my tastes align reasonably closely to those of the Academy, and many of my favourite films each year come out during this period. This year is no exception, and I’ve just seen two of the best movies in recent memory. 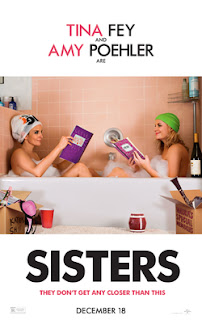 Sisters (Jason Moore, USA, 2015) is not one of those two great films. Semi-improvisation has becomethe standard format for popular American comedy in recent years, and it annoys me a little bit more each time. These films are wrapped around a simple, flimsy premise, and then the actors, usually recruited from the cast of Saturday Night Live, just say the silliest things they can come up with as the cameras roll, collecting line after line to dump in the closing blooper reel. The two leads in this case are Amy Poehler and Tina Fey, playing a pair of sisters who go into a panic when they learn their childhood home is being sold. They plan to throw one final party in the house, and that event takes up approximately three-quarters of the film. Do you see what I mean about flimsy premises?

The film’s age restriction allows Fey and Poehler to spout dirtier material than is usual for their TV roles, but none of it is especially funny. Professional wrestler John Cena makes an appearance as a drug dealer, and his comic timing is among the best on display here, continuing his cross-over success from 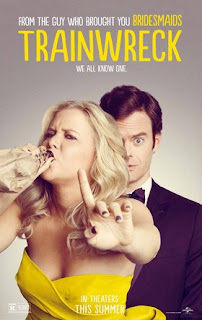 Trainwreck (Judd Apatow, USA, 2015). I feel I must make special mention of SNL cast member Bobby Moynihan, whose job is to be the most annoying, least funny person in the room. He succeeds at this, and I liked the movie less every time he opened his mouth. The film runs for an interminable 118 minutes.

The Revenant (Alejandro G. Iñárritu, USA, 2015) has been nominated for twelve Academy Awards,
which seems like the correct amount. This survival thriller takes place in the Montana snows of the early 1800s, and follows a group of animal trappers, trying to make their way back to their fort after an attack by a Native American tribe. This is the best-looking film of the year, shot in natural light by Emmanuel Lubezki, whose camera draws us through incredibly complicated battles and action sequences, lending an impressive immediacy to them. Much has already been made of Leonardo DiCaprio’s Oscar-frontrunner performance, though he is unable to do much more than grunt in agony for the better part of the picture.  DiCaprio plays historical figure Hugh Glass, who is viciously mauled by a grizzly bear, but survives, only to be left to die in the snow by a man who also happens to have killed Glass’ son. Glass sets out across the frozen landscape, crawling on his belly, looking for revenge.

I was reminded of the non-stop desperate fight for survival shown in Gravity (Alfonso Cuaron, USA, 2013). Glass has to deal with waterfalls, wild animals, the freezing cold, and more than one group of 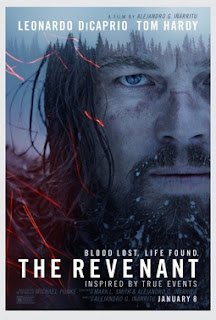 people who want him dead. The film is exhausting, but it makes time for moments of incredible beauty amidst the violence. I loved this movie, and I’ll see it again before it leaves cinemas.

Carol (Todd Haynes, USA, 2015) is even better. Much like Far From Heaven (Todd Haynes, USA, 2002), Carol tells the story of a categorically-forbidden romance in 1950s America, in a style which recreates the melodramas of that era. In the earlier film, the romance was between a white woman and a black man, and in Carol, it is between two women. Cate Blanchett plays the title-role, a woman in the middle of a divorce, and Rooney Mara plays the younger woman, Therese. The two share a literal ‘at first sight’ moment, presented completely earnestly, and from there on it barely even seems like things are under their control. Due to the era, they both struggle to talk about what’s happening to them at first, but they seem drawn to one another so completely that they hardly need to. Carol asks simple questions, and Therese replies with the single word ‘yes’, and so it goes. There are a seemingly infinite number of perfect moments in this film. Every look, every touch, every word speaks volumes. It is marvellous. 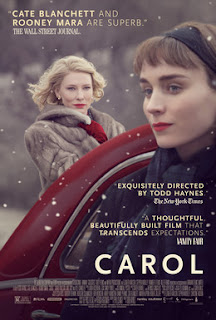 The visual design is so cohesive as to make the film feel like a time and place, rather than a story. The backgrounds are all pastels, and the costumes are all appropriately glamourous. The camera likes to look at Therese through rain-drenched windows and dusty mirrors, as her new love changes her. She barely recognises herself. Both women have much to risk, and where prejudices are rarely stated out loud, they are screamed from the disapproving glances of the film’s extras. I’ve never understood how to talk about a film’s score, but this Oscar-nominated music ties the whole experience together wonderfully, making it feel almost overwhelming. I loved Carol so much that I never wanted it to end. As the credits rolled, I stood up, walked back down to the box office, bought another ticket and immediately watched the film again. I was dangerously close to going back in for a third time. This is the best cinematic romance for a very, very long time.
Posted by Film Alert 101 at 15:28