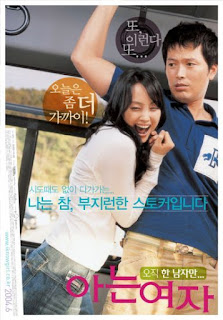 The advice I received along with the subtitled Korean release DVD was that Jang made this film to help recoup losses on his earlier efforts. It was thus intended as commercial fare. The film delivered and was a hit in its day.

Dong Chi-sung (played by Jang's fetish actor Jung Jae-young) is a man who has never had a first love. His opening breakup sets the tone. His girlfriend dumps him just after admonishing him for holding her hand in a baseball grip. A fantasy rage explosion is followed by a trip to a bar where he turns out to be a three pot screamer and quickly makes a fool of himself. The female bartender manages to get him out of the place and into a nearby hotel room. "How did I get here?" "I brought you here in a box" she says, an image we actually see and which adds a further moment of, shall we say, heightened reality to the earlier romantic break up rage.

Dong has a problem however. He has been diagnosed with cancer, incurable and fast moving, and is given three months to live. This affects him mostly as a baseball player. He's a former pitcher whose shoulder gave out and so he's now an outfielder. As well he made a fool of himself on a simple fly ball and has been relegated to the minor leagues. He wants to pitch one more game as a starter. In the meantime, he's not noticing the overwhelmingly charming love and devotion being afforded by the bartender, notwithstanding that they are thrown together when a nearby house gets robbed and he ends up, inadvertently, with the loot.

Now this might have been just a romcom but Jang is too much a satirist, too much a director wanting to effect a far more playful demeanour on his movie. The effect is that the film is utterly unsentimental and far funnier than the rest of its cohort, features which may have caused it to be that box office success I referred to earlier. 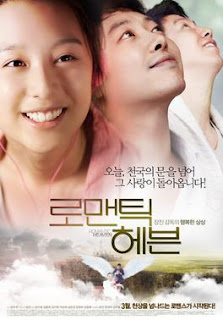 I'm not the best person to be writing about this one because my knowledge of biblical references is near to zero. I didn't pay attention at Sunday School or St Augustine's Morning Prayer and Holy Communion services.

Jang's riff on biblical themes involves half a dozen intersecting characters and narratives all of whom have to deal with death and the afterlife. Among them is a benign white-suited, grey haired old guy who conducts a somewhat ramshackle entrance exam into heaven and who turns out to be the
Christian God. He's a soft touch, as one of the characters discovers when he begs to be allowed to go back to sort out some unfinished business. (The moment when he's on the way back while the family are gathered round the body for the moment when the plug is pulled is very tense indeed.). Tony Rayns described the film as having a three-stranded plot which 'runs rings around the notion of a benevolent god watching over individual destinies." Yep....and very droll to boot. Jang's films are high on enjoyment and pure pleasure.
Posted by Film Alert 101 at 14:09