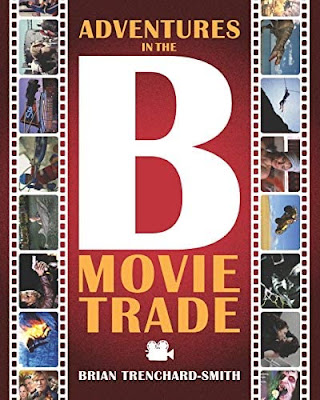 We’ve all seen those war movies where a platoon made up of racial and social stereotypes awaits the order to go Over the Top.

Well, the grizzled old sergeant, of course; tough and taciturn, with stories and scars that bespeak a lifetime of suffering and survival.

But who’s to play him? With Lee Marvin and Lee Ermey dead, thank God for Brian Trenchard-Smith.

When Sam Fuller compared cinema to “a battleground....love, hate, action, violence, death.” he might have had Trenchard-Smith in mind. Setting himself on fire or letting himself be hit by a car; grappling with animals and the elements in every corner of the earth; he’s done it all.  The “dangling testicles each the size of grapefruit” boasted by Sudan, a lion in an ill-fated attempt to revive Tarzan, might just as well have been his own.

Beginning as a publicist in Australian television, Trenchard-Smith became an accomplished constructor of trailers and promo films, his passport to a spot at the foot of the ladder. with Hollywood, one would have thought, an easy climb.  On those low rungs, however, he was destined to remain.

Why? Adventures in the B-Movie Trade discusses this in some detail. It didn’t help that his magnum opus,  the blood-boltered and dystopic Turkey Shoot,was condemned by proponents of clean and decent Australian cinema, worthy and ethnic. That it was admired by such fanciers  of cinematic Diomedeidae as Quentin Tarantino didn’t make it any less an albatross around his neck.

Nothing if not practical, Trenchard-Smith became a hired gun, a fabricator of the cheapest of cheap thrills, expert in revivals, sequels and successors.  There was a sister ship to the Titanic? Cue Britannic, with Edward Atterton and Amanda Ryan replacing (well, not exactly replacing....) Leonardo and Kate. The Yucatan has jungles? Refilm Tarzan there,  remedying a lack of African fauna by importing a chimp, a python and that lion. Reanimate Flipper, with styrofoam heads, tails and fins eking out the real dolphins, and for good measure plumb even lower depths of innuendo in a pants-down prequel to adolescent sex romp Porky’s.

Occasionally fate accorded him a hit. Vets praised The Siege of Firebase Gloria as an honest and accurate depiction of a war mythologised in Full Metal Jacket and Apocalypse Now. Applause was muted, however, for two films about a diabolical leprechaun, and for Atomic Dog, the Cujo-inspired tale of an irradiated pooch exterminating the humans who killed his pups.

If Trenchard-Smith has done it all, almost everything has been done to him. Betrayed, cheated, stranded and misled; monstered by larcenous executives and egomaniac actors, he bounced  back each time, needing only a phone call to take wing for Ulan Bator or Reykjavik, seldom with either script or contract, at the behest of financiers usually one step ahead of Chapter Eleven, the IRS or a criminal conviction, if not all three.

Trenchard-Smith enjoyed a reputation for skill with animals, working with a menagerie that included, he says modestly,  “cats, dogs, elephants, snakes, chimps, spiders, scorpions, cockroaches, mud crabs, a pigeon and a frog” . Coaxing performances from vermin, however, was nothing compared to doing so with humans.

B-movies notoriously rely on performers not yet well known and those whom most have forgotten. Particularly troublesome are the children of stars who expect to make careers on the coat-tails of famous fathers.  Delta Force 3: The Killing Game boasted the significantly less gifted sons of John Cassavetes, Kirk Douglas and Chuck Norris. Trenchard-Smith barely had time to become nostalgic for Sudan the well-hung lion before his cast contrived to have him fired.

Through the book, he periodically seeks solace in the immutable logic of physics: you never hear the Second Law of Thermodynamics complaining about the size of its trailer. He rejoices in the climax of the 1985 Dead End Drive In, for which a pick-up, hitting a ramp at 75 mph,  soared through a drive-in cinema’s neon sign to land, driver intact,  162 feet away. One senses he would have replaced the stunt man rather than spend another evening sucking up to a superannuated Glenn Ford or the self-important John Cusack.

Adventures in the B-Movie Trade has its longueurs but on almost every page one hears the authentic voice of a man dedicated to his trade, and that can’t fail to be absorbing.  The patience, endurance and good humour of Trenchard-Smith are exemplary. In Wag the Dog, David Mamet compares film producing to the life of a samurai ronin. “They pay you, day in, day out, for years so that one day when called upon, you can respond, your training at its peak, and save the day!” And what if that day isn’t worth saving? Not the point, mate. Not the bloody point.