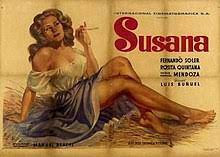 Susana may be the greatest reform school picture ever.

The YouTube clip linked below has the opening of the film.

Rosita Quintana is bad girl Susana (one of the French titles is Susana la Perverse) thrown into the reform school prison cell, to join scorpions, bats, rats and spiders. As a tarantula crawls across a shadow cast of the crucifix Susana cries out to god imploring her help to escape this hellhole. A lightning bolt strikes, thunder rolls and she miraculously manages to pull out the barred window through which she escape to quickly discover society, in the form of Capital and Labor, respectively represented by landowner Don Guadalupe, and the felicitously named Jesus, the foreman. It beats Metropolis, and Thea Von Harbou’s book for that film, by displaying both labor and capital as unworthy of pure sexuality.

You have been prepared Watch the Opening of SUSANA