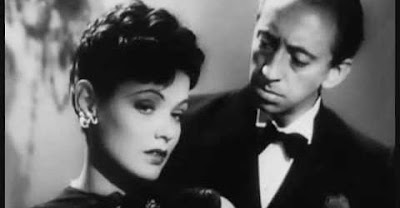 We miss here the first line of Jules Furthmann’s dialogue, in which Gene (above) says: “Mother Gin Sling, that’s a strange name.”

Furthmann’s dialogue at this point is carrying the weight of Sternberg’s play with identitiy and impersonation, and names as signifiers. “Gin Sling” (Ona Munson here sublimely decked out in a hallucinatory headpiece by Hazel Rogers) hints at the length and depth of her, and Poppy’s (Gene Tierney’s) future.

Sternberg and lighting cameraman Paul Ivano cut between close ups of the two women and later, “Doctor Omar” (Victor Mature) appearing to have their heads adjusted at an angle to their bodies which recede into shadow against the key lights on their faces. All the while the actors read Furthmann’s dialogue as though it were sacred text rescued from some long lost opium soaked mystical tome, but in a monotonal style that only just belies the camp.

The whole film operates on this level, high stylization to the point of absurdity while the narrative ultimately leads to tragedy.