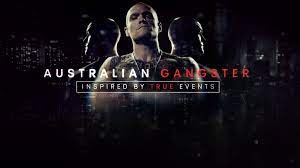 Delayed from its original release in 2018 due to “legal problems”, Australian Gangster sprawls over close to three hours and depicts the life and times of real-life Sydney “underworld figure” Pasquale ‘Pat’ Barbaro (Alexander Bertrand).

Known as an “Instagangster”, Pat is portrayed as a health-conscious gym-junkie who worries about the sugar content in yogurt, drinks low-carb beer and isn’t afraid to order a latte in front of his murderous Sydney gangbanger mates. He drives an ostentatious Lamborghini, plots murders, snorts and deals coke, loves his tatts, posts on Instagram in poses with assorted party “skanks” and is progressively sleep-deprived after having mistakenly shown Child’s Play to his two young children who now wake up screaming all night long.

The “legal problems” appear to have been issues with depicting real-life figures. Apart from Barbaro, other characters from real-life include Pat’s wife, the long-suffering Melinda Barbaro (Louisa Mignone); the height-challenged Brothers-For-Life gang member Mohammed Hamzy aka “Little Crazy” (Rahel Romahn); and Giuseppe ‘Joe’ Barbaro (Steve Bastoni), Pat’s criminal dad who once shared a prison term with his son, after the two of them were convicted of running an interstate amphetamine ring. Thanks to my mother’s favourite read New Ideafor this information.

Sydney’s well-known suburban driveway assassinations; the Lebanese, Pacific Islander and Italian Mafia gangs; and coked-up day-and-night parties on Harbour cruises all get an airing, as does a fascinating corrupt construction company designed to wash drug money through the hiring of cranes on gigantic CBD sites. There’s one too many drives across the Anzac Bridge and too many scenes set in an apartment with a point-blank view of the Bridge for the New Year’s Eve fireworks.

Much is made of Dad and Son’s Italian heritage from the Barbaro ‘ndrina clan of the Calabrian ‘Ndrangheta crime and mafia mob.

Australian Gangster, written and co-directed by Gregor Jordan is something of a return to form for the filmmaker after his disastrous attempt to bring Tim Winton’s Dirt Music to the screen. It’s recommended for anyone with an interest in Barbaro and his ilk.

Across the three-hours, there are tonal inconsistences and some character relationships that fall flat (Bertrand and Bastoni don’t make a convincing father and son). Jordan’s research has obviously been exhaustive and his dialogue is peppered with great Aussie slang including the much neglected “cracking the shits” and the perhaps over-used “rooting sluts”.

On several occasions, Miranda Kerr is spoken of as a venerated divine goddess. You don’t get that in many local television series.