On Blu-ray - We welcome back David Hare with his appreciation of the 'lost' Monogram noir I WOULDN'T BE IN YOUR SHOES (William Nigh, USA, 1948) 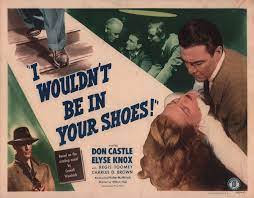 When Godard included a title card dedicated to Monogram Pictures in his groundbreaking nouvelle vague A Bout de Souffle he was unwittingly cueing generations of movie fans into the the mistaken belief that Monogram Pictures itself was a totally poverty row outfit. It wasn't. Over time it grew bigger and more efficient with major producers like the King Brothers, and in this case, Walter Mirisch, and it morphed in the early 1950s into Allied Artists.

And now, from the latest bundle of Warner Archive restoration Blu-rays, a previously "lost" Monogram Noir from 1948, I Wouldn't be in Your Shoes directed by all-rounder William Nigh. The new restoration looks like a gift from Nitrate Paradise, so pristine it's as though the negative had never been used to strike a single print.

The "Poverty Row" slur on the studio is a deeply flawed view of the outfit which by the end of the war was making near A-level, length, budget and quality movies in the most loathed of genres by highbrow critics of the time like Agee.

Their loss. Some outstanding titles from year 1945 and 46: Max Nossek's Dillinger  with Lawrence Tierney in the title role, and the superb Noir-on-Ice,Suspensewith Skating Queen Belita, Barry Sullivan and surrealist production design directed by Frank Tuttle. Both these titles were released in 2009 by Warner Archive on DVD.  Ulmer's Detour from the even less gifted studio PRC, clearly a masterpiece of the genre was released in its astonishing new 4K restoration by Criterion two years ago.

This leads us to the picture at hand,  I Wouldn't be in Your Shoes. Running 70 minutes, the movie is based on a short novella by Cornell Woolrich, writing under the "William Irish" moniker. A number of happenstances lead a guileless sucker and his wife to take the fall for a murder committed by someone else after they find a wad of cash that can lift their impoverished lives.

The trajectory of the screenplay for the movie sticks tightly to Woolrich's layout thanks to screenwriter Steve Fisher, right down to a completely unexpected "bend” in the movie's POV when detective Regis Toomey tries to find evidence to exonerate the husband which takes up the entire middle act of the picture. The leads are more than alright for "B" fare with Don Castle as the sucker husband, and Elyse Knox, taking the Ella Raines type Phantom Lady role as the wife who effectively prostitutes herself to detective Toomey to save her husband now on death row for the next 40 minutes of the 70 minute picture

Each principle character is "bent" in some way or another. Husband "Thomas" played by an efficient, masochistic Castle seems to almost immediately accept his relegation to death row as some kind of joyous martyrdom for his failure as a husband. The three major scenes in the death row quarter are photographed with diagonally lit, totally asymmetrically composed shots within a montage that forms several verses of a condemned chorus and is one of the highlights of the picture's visual style. The only wrong note here is the overly soupy Chopin Fantaisie Impromptu adaptation to "I'm Always Chasing Rainbows" which one of the condemnees plays in a conveniently stashed phonograph.

While not at the heady level of Ella Raines in her Siodmak pictures, Elyse Knox as Anne plays a more than creditable heroine, here on a budget with the rest of the picture for under 300 grand which would have barely paid for only the first thirty minutes of an equivalent Universal or RKO "A" picture.

Most remarkable of all a terrific performance from the redoubtable Regis Toomey (Spellbound, The Big Sleep, Raw Deal) who takes his part, Inspector Clint Judd right to the top of the genre's tone and form. Some of director William Nigh's mise-en-scène takes up the latter half of the picture with quite ravishing exercises in growing and diminishing shadow playing on Toomis' face while he reads his lines like a true leading man in what he wishes were a bigger, other scenario. It's quite something and I won't plot spoil by saying any more.

The disc comes with an interminable 1932 Vitaphone short crime fiction mess of a thing directed by Warner's "C" budget specialty unit maestro, Joseph Henabery, The Symphony Murder Mystery, an endurance test to be sure, and one of my favorite Merry Melodies cartoons from 1945, Holiday for Shoestrings, a masterpiece in fanciful storytelling and a perfect fit for the main feature.