There is, as always, plenty of activity for those interested in the history of the cinema.

THE LONG AND WINDING ROAD: THE FILMS OF ABBAS KIAROSTAMI

The Sydney Film Festival has announced its major retrospective for 2021, an eight program season devoted to the Iranian master Abbas Kiarostami. The season will also be screening in Melbourne and Canberra at screenings organized by the Melbourne Cinematheque, ACMI and the NFSA.

Kiarostami made films from 1970 until his death in 2016. For a decade and a half he was largely unknown outside Iran and it was in this period that he honed his unique ways of telling stories. The SFF program will delve into this period. Among the selection is his first feature length film Traveller (1974) which as far as is known has never been screened in Sydney.

When he died in 2016 Anne-Demy Geroe, one time director of the Brisbane International Film Festival and a massive supporter of Kiarostami’s work wrote a very heartfelt tribute published on the Film Alert blog which you can read If you click here.

Across four decades, his deeply humanist and formally inventive works drew praise from global audiences and critics but perhaps he was most revered by filmmakers themselves. Martin Scorsese attributed the “highest level of artistry in the cinema” to Kiarostami and Japanese filmmaker Akira Kurosawa said, “When Satyajit Ray passed on, I was very depressed. But after seeing Kiarostami’s films, I thanked God for giving us just the right person to take his place.”

Born in Tehran in 1940, Kiarostami studied painting and graphic design, directed commercials, wrote poetry, and illustrated children’s books before embarking on filmmaking. His early films largely centred on the lives of children but as Kiarostami was often at pains to clarify they were “about, but not necessarily for, children”. Journeys and quests form the backbone of Kiarostami’s narrative films and in particular, the titles in this season, but as critic Jonathan Rosenbaum suggests, it’s not the resolution of the quest but the digressions that offer much of the “personality, humour, and atmosphere” in these films.

The Koker trilogy (Where is the Friends House?, And Life Goes On, Through the Olive Trees) introduced Kiarostami to the world. Named for the region where they were shot, the films became increasingly meta, and this formal experimentation alongside the use of non-professional actors lent an unbridled dimension which is exhilarating on first or repeated viewings. Critically acclaimed films such as The Wind Will Carry Us and Taste of Cherry followed.

Kiarostami met the new millennium on its terms, experimenting with digital technologies and pushing the very boundaries of what film direction is with his masterpiece Ten. Critic and programmer Geoff Andrew noted that while Kiarostami was not a traditional cinephile, “he probably thought more deeply about cinema – its potential, limitations, and ethics – than most filmmakers”. By the end of his career, the fine artist, teacher, and collaborator had introduced the world to Iranian cinema whilst changing the very boundaries of what we call a film.

Just one film to go in the season of Jean-Pierre Melville films being screened at the Elsternwick Classic and the Hawthorn Lido after screening at the Randwick Ritz in October 2020. The final film is Un Flic, his final film, starring Alain Delon and Catherine Deneuve. In Sydney the film was introduced by film-maker Margot Nash and you can read her thoughts on the film and more generally on Melville if you Click Here

Starting around Australia on 17 July (although its unlikely to go on in Sydney) a major retrospective of ten of the feature length films made by Charles Chaplin between 1921 (The Kid)  through to 1957 (A King in New York) will be screening once a month for much of the next year. In Sydney, once it re-opens, its on at the Randwick Ritz and, north of the harbor, at the Cremorne Orpheum, in Melbourne at the Elsternwick Classic and the Hawthorn Lido.

On Saturday 10 July John McDonald devoted his column in the Financial Review to Charlie and the first film in the series The Kid and has posted the column on his personal website. You can read it if you click here. 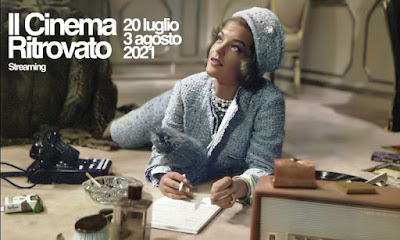 The greatest event in the world for restorations and the presentation of retrospectives and archival material is organized by the Cineteca di Bologna. Cinephiles from around the world have gathered in Bologna for the week long event for over thirty years. When Covid struck last year Bologna responded by presenting an online event and later a physical, socially distanced event. It’s back again in both formats and for those of us locked up or locked down in Australia below are the details to allow you to subscribe for an event of pretty good value. Here is the email the Bologna organisers have sent out:

After a year in which we have successfully trialled online screenings of the great masterpieces of the past, for the 35th edition of Il Cinema Ritrovato we will once again bring you a selection drawn from the programme of the in-person event in Bologna. It is a broad selection, representative of the various aspects of the festival, and is viewable throughout the world (unless otherwise indicated); it offers a digital variation of this year’s Il Cinema Ritrovato to all the friends, cinéphiles, colleagues and film historians who have been coming to Bologna for years as well as to those who are discovering the festival for the first time, even if it is during a year when they cannot be physically present.

The streamed version of the festival, realised in collaboration with MyMovies, will begin at the same time as the physical event, 20 July, but will last a week longer, until the 3 August. We will soon reveal the programme, which has been specifically created for online viewing: a collection of rare films, new restorations, meetings and film lessons, each with its own start time, just as if you were in the cinema. It offers a bridge to the physical festival for those who cannot be here, a way to be part of this edition, which is atypical but, in its own way, unique.