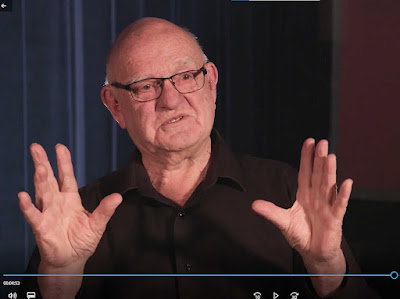 Storry Walton has been everywhere in the Australian film industry. His Wikipedia entry is succinct but, to steal an Andrew Sarris joke, like Margaret Dumont in those Marx Brothers movies, it covers a lot a territory.

Storry Walton AM is an Australian academic, writer, producer and director. He produced and directed many television plays and serials, including My Brother Jack. He has directed ABC documentaries on art and on rural matters. While based in London, made programs for the BBC-TV social documentary series, Man Alive.

He was an early director of the Australian Film and Television School and had a long relationship with the National Institute of Dramatic Art.

In 1984 Walton was made a Member of the Order of Australia  for "service to the Australian film industry, particularly as director of the Australian Film and Television School".

Storry recently recorded a thoughtful consideration of many aspects of oral history, its special role as a form of historical record, and the challenges in making it more accessible to more people.

The video interview has been skilfully broken up into bite-sized segments by Malcolm Smith, and we are posting the segments progressively on the  website of the Australian Media Oral History Group -

The first bit (6'47") is here  https://amohg.wordpress.com/stories/storry-interviewed/.