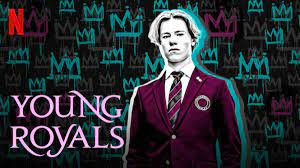 A teenage Swedish prince misbehaves at a his local high school, prompting the Queen to send him to a traditional boarding school for the privileged - a sort of Nordic class-ridden, co-ed, Gordonstoun.

Pretty much from the moment Prince Wilhelm (Edvin Ryding) walks into the Hillerska School, he gets the hots for Simon (Omar Rudberg) after hearing him sing in the choir. Many side-ways looks, meaningful glances and stony stares later, the boys finally get it on, but wouldn’t you know it? Willy’s older bro, the Crown Prince Erik inconveniently ups and dies in a car accident leaving Wilhelm as the next in line to the throne.

This brings the Prince’s gay flirtation to an abrupt end. Duty, Responsibility, Serving The Nation and Producing Heirs quickly takes over, but the love-struck Simon is none too happy with this. He is openly gay with his family (diversity tick one); a scholarship student (diversity tick two); of Spanish origin (tick three); from a lower-class background (tick four); and has a supportive younger sister - a horse whisperer if ever there was one – and she is on the autism spectrum (tick five).

There’s also Felice (Nikita Uggla) who keeps threatening to become a three-dimension character, but whose sole mission in life seems be to marry a royal. That, and having her horse obey her commands.

The usual teen drama tropes come thick and fast, but backdate the out-of-school clothes, drop the hip-hoppy soundtrack and make the cars 70 years older and you’d be forgiven for thinking Young Royals is set in the 1950s.

The gay love story, with Wilhelm swinging between staying in the closet and coming out, eventually saves the day but things get very opaque by the end of final episode suggesting there may be a season two.

I’d rather re-watch Rebel Without a Cause.