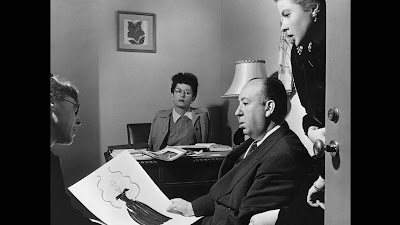 A production still  (above) from one of many bonus features on the new Criterion Blu-ray of Notorious.

Taken from a new 4K scan of MoMA's nitrate O-neg, a high quality nitrate dupe pos 35mm, and a fine grain safety pos 35mm which was used to recapture and scan several dupe sections from the O-Neg which have been a persistent weakness for decades.

The movie now looks better than it ever has. And the new disc adds kudos by carrying several new supplements, plus most of the bonus features from Criterion's old DVD and MGM's quite good but now superseded Blu-ray from six or seven years ago. 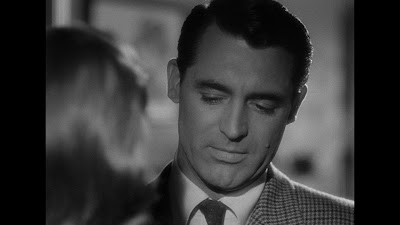 I have long agreed with Truffaut (with whom I don't agree that often) that this is Hitchcock's greatest B&W film, despite very stiff competition from the rest of his oeuvre. The final break from Selznick enabled him to escape to RKO where he was able to effectively produce the movie himself, although he's not credited as such. Everything once again feels like one of his late British pictures, but with big Hollywood production values in the way it seems to spin on a perfect set of playful vibrations, starting with the casting and the incomparably mysterious figure of Cary Grant's Devlin (above), seemingly a man without a back story whose emotional life may well be as stunted as Cary's superb, quietly burning performance suggests. 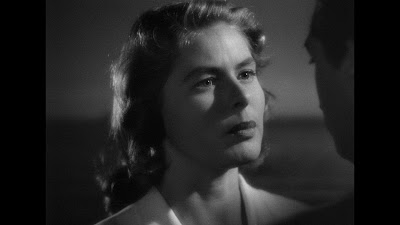 Bergman (above) is in peak range, and has never been more physically moving. Her performance is urgently emotional. And Hitch's most sympathetic villain, the oppressively oedipal Claude Rains as Alex Sebastian.

Every bit part is also perfectly crystallized, from Louis Calhern's smug, misogynist FBI manager, to Reinhold Schunzel as the compassionate, "kindly" Doctor Anderson amongst the Nazi cabal in Rio.

Indeed, writer Ben Hecht gives Hitch a flawlessly detailed screenplay populated with quickly sketched but highly effective character ciphers for the secondary cast, a strategy which enhances the leads. RKO also gave Hitch their great, unsung music director, Roy Webb whose library sourced score is matched impeccably to mood - the "waltz" piece playing through Alicia's first big party scene.  Climaxing with the key switch is an RKO musical staple which turns up again if not so strikingly in Out of the Past, among several other 40s RKO pictures. Ted Tetzlaff who had shot over 100 features before making this as his last job as DP, before becoming a director with the childhood nightmare noir,The Window, shows he can top even as technically speedy a DP as Sol Polito or Stanley Cortez with fast tracking, multiple lighting setups in depth, and apparently virtuoso mega takes, like the famous Ballroom key shot which seems to be a massive travelling crane from the chandelier above the reception room to Alicia's clenched fist concealing the key to the wine cellar.

That shot is partly tracking, but also substantially telephoto process lab work, like a number of other throwaway but brilliant shots which combine physically impossible components. Another example is the second shot from the movie's opening which views the closing words of Alicia’s father's trial shouted through a door, from the POV of the media scrum outside the courtroom. In this new 4K, perhaps for the first time the lines between doorway, POV positioning and the distant courtroom still in focus visibly reveal the shot as a set of almost imperceptible optical mattes, with a glimmer of shudder from the labwork.

The new 4K scan quality is revelatory not only for such felicities of camera trickery, but for sheer physical detail and expression, especially in the unbelievably beautiful close-ups of Grant and Bergman. The single take 360% clinch and kiss on the balcony with Rio in process in the background is more rhapsodic in sheer physical presence than ever before.

Once again I only wish Criterion had already made the leap to 4K UHD disc format for these new treasures that are literally rebirthing so much great cinema. The work on this gorgeous new 4K was performed in concert with Walt Disney (which has been a copyright holder of some of MGM's library over the years including the Selznick titles), Warner's titanic MPI facility in Burbank, and Lee Kline from Criterion who supervised the scan and transfer to 4K. 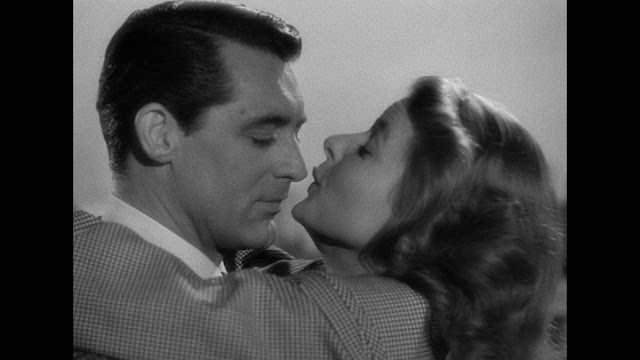