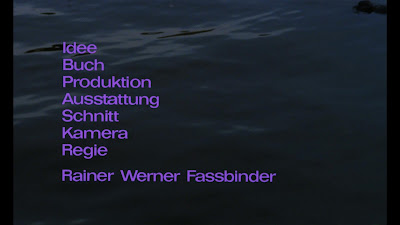 The credits (screen above) say it all.
Fassbinder's masterful In a Year with 13 Moons, first released in 1978 is finally out in a new Blu-ray edition taken from a 4K restoration by Studio Canal which I had the great honor  to introduce last year at Geoff Gardner's first Cinema Reborn program in Sydney.
Sadly the current release is German language only, from German Canal licensee, Arthaus. I hope Canal sees enough sales potential to multi-sub the film and give it a broader release soon.
As I commented at the time, this is one of several Fassbinder’s that has not been easy to see, and I speculated then that last year's 4K DCP screening in Sydney was the first in Oz since it was shown once only at Sydney and Melbourne FFs ca. 1978 or 79.
It was notably and oft quoted as made in response to the suicide/coke and booze OD of Fassbinder's longtime on-and-off lover Armin Meier. Fassbinder's legendary grimness notwithstanding, the picture in fact revels in some of the director's blackest and rawest humor, and the ironies are laid on with a trowel, especially the music track which seems to be playing with high Queenery arthouse as Extremely High Camp, for example, Mahler's 5th Adagietto, pinched from Visconti's turgid and navel-gazing bumfluff, Death in Venice, which Rainer scores for Elvira's opening Hamburg beat trawl in which she's beaten up by some Polish leather queens who discover she doesn't have a cock. 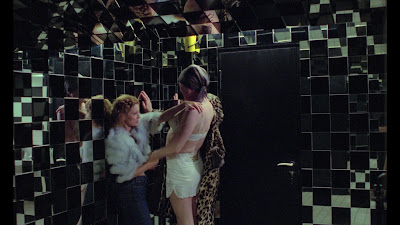 The same music is then quoted during the second big tableau, a stroll through an active slaughterhouse with BFF Zora played by ex-Mrs Fassbinder, the great cabaret artiste Ingrid Caven (above). Their journey through Elvira's last day takes them to a high Pasolini moment in Fassbinder cinema, paralleling the crucifixion scene in PPP's Gospel movie where they meet the director's mother, Lilo Pempeit, at a convent playing "Sister Gudrun", who greets the couple and narrates a chapter of "secrets" from Erwin/Elvira's unhappy childhood. (Below) 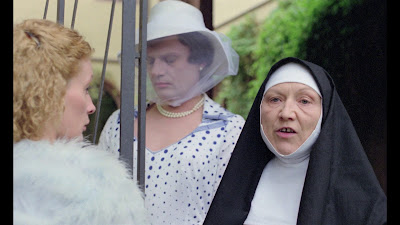 The movie is breathtaking in its audacity, and the unyieldingly high-pitched performance from Volker Spengler  is outstanding even in the context of Fassbinder's concentrated and stylized performance modes. Perhaps the greatest moment of black noise, and complete abandonment of "good taste" is the sequence in which Elvira revisits the love of her life, the man for whom she had her sex change operation, Fassbinder's favourite skinny bad guy, Gottfried John playing the Jewish survivor.
He's now a crooked property developer (aren't they all?) whose office is secured by a password which, as read by Elvira with perfect recall, is a number from one of the vaults at Auschwitz. When Elvira enters this sanctum the entire office staff are all dancing in synch to a scene from a rarely seen Jerry Lewis/Dean Martin movie, You're Never too Young, (1955) in which Lewis plays one Wilbur Hoolick. Perhaps, I wondered, if Fassbinder was having a presentiment of Lewis's Holocaust movie?
So an advance notice I guess of one of my own favourite Fassbinder films, with an English-friendly release hopefully not too far away.