The indefatigable David Donaldson has arranged for an Adelaide screening to celebrate the centenary of the premiere of Raymond Longford's classic The Sentimental Bloke. David writes:


Doreen and The Bloke
The Sentimental Bloke was produced by the Adelaide company, Southern Cross Feature Film Co.  As reported with enthusiasm by the Adelaide press the next day (click on the link below), at the Wondergraph private show on 26 November 1918 were C.J. Dennis, Raymond Longford, Arthur Tauchert, Lottie Lyell and the cinematographer Arthur Higgins,

The South Australia State Library will commemorate that show on Monday 26 November 2018 in the Hetzel Room. The legendary Adelaide musician Tom King had played for the film in 1919 and in 1961 the National Library recorded his piano accompaniment.

Watch for announcements from the State Library!
The show will be free but limited to 120 seats.
Early inquiry to filmart@dodo.com.au
Like The Facebook page on Lottie Lyell 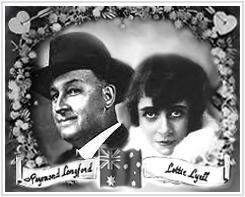 An Adelaide newspaper report on the screening