Editor’s Note: This is the first collection of tributes to my friend a great man of Cinema Pierre Rissient. Coming right in the middle of our very own Cinema Reborn event somehow seems like a good time to go. Pierre was as passionate about retrieving the cinema’s past as he was about discovering the cinema’s future. He will be missed. 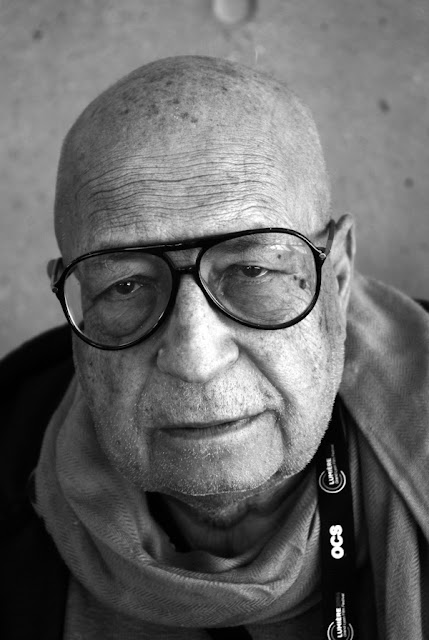 Mary Stephen – Director, editor, teacher and cinephile:
With the world’s most emblematic film festival about to start, we all each have our story and memory about he who left us last night, who’s been a fixture in Cannes and many other festivals all around the globe ... what else can be added indeed? As I search in my mind though, the words that come to mind associated with memory of PR are ‘loyalty’ and the French sense of ‘tendresse’ ... they talk about his amazing work, his indefatigable passion for cinema, his associations with many iconic directors in the field, but I think about someone who’s loyal in his friendship and affections for over 40 years, who was unwavering in his ‘tendresse’ about his cinematic friends once he had gathered them into his world of friends, who’d remember each of their films that made a mark with him be them ever so small or indie or whatever, who’d always hold a place of affection in conversation and thought to the freddie and the geoff and the mary and the lino in the same breath he’d be talking about his last conversation with clint and the other anecdote about fritz. In his legendary bursts of temper, seemingly overbearing personality there was a true shyness; in his surface manner of name-dropping (he didn’t drop them, they were really part of his daily bread after all) there was loyal kindness. I will always remember a question he asked during my twenties, newbie to the city of Paris and the notoriously difficult way she makes newbies bleed before she integrates them, “whom do you talk to if you are in trouble in Paris?” ... that is when, even young soul that I was then, I caught sight of the very shy but the very loyal side of someone who had never faltered in his loyalty, whether to the other pierre or an eric in real-action situations or in recognition of early works no matter how big or small we were, never hesitating to introduce me talking about my first film which impressed him which hardly anybody has ever seen or another time, flooring everyone, at a hilltop hotel overlooking Locarno, he singles out a Canadian director and talks about his first film and how it impressed him, decades earlier. I hear the anecdote years ago about some obscure ciné club or small festival somewhere in the heart of western Canada and there would be the little hat on PR’s head in their midst, impatient to discover a perhaps-gem. (An anecdote told by another departed passionate soul, our sheila) ... many are put off by his words, shouts, tempers, I must be a bit dim-witted, yes I think of ‘loyalty’ and ‘tendresse’. Bonne nuit, cher et loyal ami. (From Facebook)

Joseph McBride- Scholar, film-maker, critic, cinéphile
I am sad to hear about the death of the legendary French publicist, occasional filmmaker, and all-around "man of cinema" Pierre Rissient but was happy to know him from way back in my Variety days. I first met him when he set up an interview at the Polo Lounge with producer Anatole Dauman; Dauman and I watched in awe as Pierre tucked into his enormous crepes with gusto. A couple of years ago our mutual friend Tom Luddy brought us back together here in Berkeley for a memorable evening at Chez Panisse. Pierre knew everyone and helped promote great filmmakers he admired, making important contributions to their legacies. He and Bertrand Tavernier even sponsored a memorable visit to Paris by John Ford in conjunction with a revival of "Fort Apache" in the late sixties and tried to launch a film of Maupassant's "Boule de Suif" that Ford would direct, but Leslie Caron killed it because she thought Ford was old-fashioned (Ford had loosely adapted the same story for "Stagecoach"). Pierre always fought the good fight for the art of cinema. (From Facebook)

Sue Murray- Producer, distributor, script consultant and cinéphile:
Pierre Rissient was very good at what he did:  championing and encouraging directors whose work he admired.  Those collaborations often resulted in long-lasting friendships and his generosity and attention to those friends was remarkable.  I met Pierre Rissient through David Roe and Sylvie Le Clézio in Melbourne in 1976 little knowing at that time that I woud come to have a professional association with him as well.  During my time as Director of Marketing at the AFC (1987-1998) Pierre would visit Australia annually to look at films ready in time for Cannes and he proved a very good judge of what the Cannes committee woud appreciate and what would be well received in Cannes.  His support for Jane Campion is widely known, but he also advocated filmmakers such as Rolf de Heer, Fred Schepisi, Tracey Moffat, Shirley Barrett, Bill Bennett, Baz Luhrmann, Stephan Elliot, Ivan Sen, Scott Murray, Laurie McInness and New Zealanders Vincent Ward and Alison Maclean, amongst others.  Discussing the films he saw with Pierre was a privilege and an education.  He could be an abrupt and dogmatic critic but invariably he identified aspects that interrupted one’s engagement with the film, that detracted from the film’s impact and the director’s vision. He did not hold back if he felt that his advice could result in a better reception to the film.   Understandably, such advice was not always welcome, but those who took it appreciated his insights and sought his views on their subsequent films.

When last I spoke with him, he told me that he would not have been able to face his many health challenges without the love and support of his wife, Yung Hee.  Pierre was not one for talking about his personal life, and so it made a big impression on me.

It is a sad realization that I will no longer be able to sit down with Pierre to talk about cinema, literature, art and life.   He will be rightly remembered for his role in helping audiences discover directors from many countries in Asia, scouting for festivals, and especially for promoting Australian cinema, but for me he was also a loyal, perceptive and generous friend.

Many treasured moments with Pierre.  I vividly remember my first encounter with him in Canberra in the mid-70s when he expressed, in his most vigorous and assertive style, the importance of Raymond Longford and Lottie Lyell, after he’d seen THE SENTIMENTAL BLOKE.  He referred back to them whenever I met him again, always with further thoughts about the Longford-Lyell cause.
I met him a few times in Cannes in the early 90s and he was generous in talking up films that I was representing there, including STRICTLY BALLROOM.  I recall him berating me for not having a T-shirt to give him because he said he’d wear it - and, beating his chest, he loudly pronounced that a T-shirt on his chest was the best publicity a film could have in Cannes.
Meeting him last year in Bologna over a hotel breakfast, it was as though a conversation was continuing, that there’d been no interruption, even though it was maybe ten years since I’d last spoken with him.
He will be missed.

Neil McGlone – Programmer, festival consultant, collector, cinéphile
Just hearing the very sad news regarding the passing of the French film critic, writer and producer, Pierre Rissient, at the age of 81.
During my years at Il Cinema Ritrovato, Pierre was a regular attendee and often could be found holding court in a shaded area adjacent to the Cineteca with friends and adoring fans of his immense contribution to World Cinema, engaged in deep conversation with him. I believe it was Geoffrey Gardner who first introduced me to the great man one year at the festival, as he had known him for some years previous when Geoff was in charge at the Melbourne Film Festival. A very memorable evening meal was had with the great man, who was never afraid to voice his opinion, especially that evening when berating a waiter!
In latter years he stayed at the same Bologna hotel as myself and I would often see him at breakfast and speak with him, always in awe of his stories, knowledge and film recommendations.
Posted by Film Alert 101 at 19:27