SAM WOOD was a versatile American director/craftsman whose best work drew some fine performances from Hollywood’s golden age stars. His earliest silent film dates back to 1919. He made star vehicles for both Gloria Swanson and the ill-fated Wallace Reid during the 1920s. In the 1930s he was assigned to two of the Marx Brothers’ best-known films - A Night at the Opera (1935), and A Day at the Races (1937). He didn’t get in the way of their chaotic antics and their set-pieces were executed with a gusto that was among their funniest and most durable. The extended finale of A Night at the Opera is outrageous, culminating in an extended set piece where  Groucho invades the operatic performance and turns it into a total travesty. Wood was nothing if not versatile and changed gears effortlessly in his direction of the much-loved, poignant Goodbye Mr Chips (1939) which handed Robert Donat a well-deserved Academy Award. Wood worked equally well in small town or romantic melodrama, comedy or action. But he also made too many duds and later revealed himself as a rabid McCarthyist. 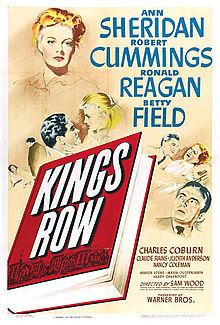 King’s Row (1941) is Wood’s, and Ronald Reagan’s, most famous claim to screen immortality, but it’s not really a director’s film. In Hollywood’s Golden Age (1920s-1960s), the studio house style was frequently more the immediately recognizable factor in a film, rather than the sum of its individual contributors. King’s Row is one of the finest studio films. It brims over with the energy and vitality of Warner Brothers seamless teamwork. At this point in his career, Sam Wood had made his fair share of good and patchy films (and much in between). However, working with a thoroughly talented group of people including producer Hal Wallis, designer William Cameron Menzies, cinematographer James Wong Howe, screenwriter Casey Robinson and brilliant house musician Erich Wolfgang Korngold, he fashioned in this instance a sombrely effective piece of film craft that is now acknowledged as one of Hollywood’s first and finest small-town melodramas.

Prefiguring Peyton Place (mark Robson, 1957by over a decade, and like that film based on a popular best-selling novel, King’s Row dissects a small, turn of the century American community through the eyes of young, idealistic medical student (Robert Cummings, surprisingly intense and convincing in the part). In the process, he discovers and confronts sadism (local surgeon Charles Coburn “punishes” certain patients who have incurred his moral disapproval through unnecessary butchery), madness, murder-suicide, and emotions that run high on both sides of the tracks.

One of the film’s major assets is Ann Sheridan as the spunky Irish girl from the wrong side of the tracks. Her characterization showcases her warmth and intelligence, and she makes the most of her emotionally demanding scenes with Ronald Reagan. Some of Warner’s best scene-stealers in the business are also prominent in the cast, among them Claude Rains as the tortured, ill-fated Dr Towers; Betty Field plays the mentally ill Cassie Towers whose fate determines the Cummings character to take up medicine. Charles Coburn contributes an atypically dark performance as the chilling surgeon who “punishes” Ronald Reagan for his “sins”, and Judith Anderson is genteelly complicit as Coburn’s wife. But best of all is Ronald Reagan, bland and opportunistic but crossing one too many psychotic doctors to end up leglessly shouting “Where's the rest of me?”