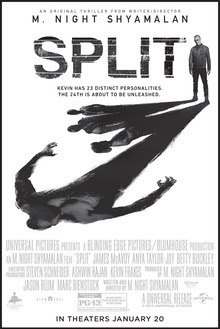 In the Event Cinema for an afternoon session were at lot of mid-to-late teenagers, mostly in couples, but also in posses, one with a red laser that occasionally ran all over the screen and a couple behind us who managed to remain in a contorted missionary position, snogging on and on but occasionally audibly gasping at events on the screen. At the end, the rows were strewn with McDonalds bags, soft drink bottles, chip holders, serviettes and other objects of unknown origin. Other than that, they were pretty well behaved.

When Blum Productions led the opening credit role, I knew where I was. This was going to be a date-horror flick, a specialty of the remarkably successful and prolific Jason Blum. His “make 'em cheap and make 'em make money” approach to producing positions him as a latter-day Roger Corman and his franchises for Paranormal Activity and Insidious have made him a lot of money. He has started to get tasteful though, producing Whiplash, the superior TV movie The Normal Heart and now a film described by many as M. Night Shyamalan’s “comeback”.

It’s tasteful horror, not too gross, not too exploitative, with dissociative personality disorder and various forms of child abuse as its psychological underpinnings - although the victim-abduction-held-in-a-small-room scenario plays with sadistic nightmares of films like Saw. Around these limited locations, Shyamalan really does have a return to form as he toys with and consistently surprises the audience.

As good as the script and direction are, it’s James McAvoy, asked to play only a handful of his 24 separate personalities, who makes this film. He gives the performance of his career, a commanding, mesmerising and controlled tour de force, light years ahead of Oscar contenders Ryan Gosling (La La Land) and Viggo Mortensen (Captain Fantastic). Why McAvoy didn’t get a nomination…oh…wait…it’s a horror film….

And the date-movie kids? They were all there for the final credits and the horror-flic in-joke planted in the credits when a very famous actor appears in character from 16-year-old  M. Night Shyamalan film.  There was not a sound. No recognition at all. Joke fell flat. Wrong demographic, they were barely born when that film was made. Sixteen years ago? As a young clothes salesman said to me recently when I mentioned the Vietnam War “Never heard of it. I didn’t do Modern History at school”.
Posted by Film Alert 101 at 03:27